Digging around for answers 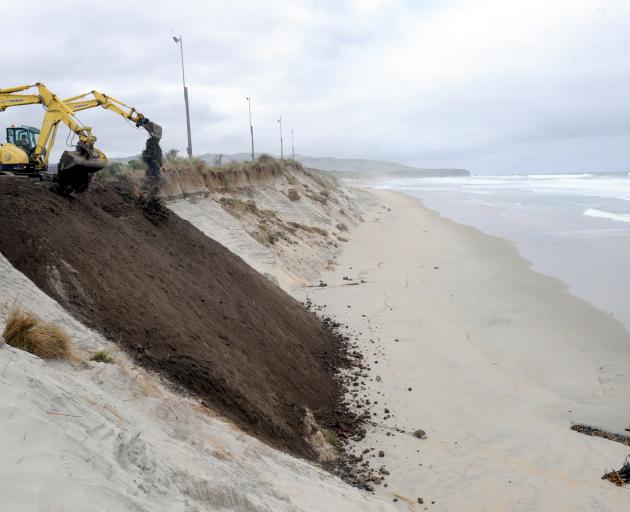 Diggers dump sand on to an area of Dunedin's Middle Beach subject to recent erosion. Photo by Stephen Jaquiery.
The Central Otago landscape is littered with gold-mining relics, from eroded sluicings and neat stacks of stones to old water races and cottages. But what was life like on the goldfields and why did so many men swag up and tramp into the unknown back country during the gold rushes of the 1860s? Charmian Smith talks to Stevan Eldred-Grigg, author of Diggers Hatters and Whores: The Story of the New Zealand Gold Rushes.

Stevan Eldred-Grigg felt as if he heard hundreds of people speaking from the past, and saw throngs of people moving across wild landscapes when he was researching and writing his latest book about the New Zealand gold rushes.

A novelist as well a historian, Eldred-Grigg says. he wanted to show what it was like for people on the goldfields, as well as to analyse some of the reasons they went, and to look at the social issues of the time.

The book quotes from diaries, letters, newspaper reports and other contemporary writings.

One of Eldred-Grigg's favourite images is of a portly tradesman from Nelson toiling towards the Wakamarina field, leaning exhausted on a tree in the wilderness and asking where he could get a cup of tea.

While people from all walks of life went digging for gold, those who did best were used to physical work, but also had some technical skills and a little capital to buy equipment and supplies and to travel to the goldfields, he says.

Most hoped to make a nest-egg to enable them to return home and buy a farm or business and become a "free man".

What Eldred-Grigg found was that miners, except for the odd loner known as a "hatter", worked in groups, usually with a "pard" or partner, who might end up being a sexual partner as well as a working partner.

Small groups of diggers would join forces to build water races or other large works, then each group would use the water to do its own washing for gold.

"This was another thing that made me aware that an ordinary labourer didn't usually have the technical skills - he had the strength, was able to work long hours out of doors in all weathers, but he usually didn't have that extra layer of technical knowhow that a more skilled worker or a sailor might have.

"Sailors were very good at scanning the horizon and working out falls, so they did very well on goldfields. Very few professional engineers were working on the goldfields in that capacity during that early alluvial mining phase."

Life was hard, winters cold, summers hot and starvation was never far away.

With a diet of damper, tea and mutton, usually stolen from the sheep runs of the "wool lords", and little in the way of vegetables or fruit, healthy young men would become wasted and wan after a year or two on the diggings.

"It was even grimmer on the West Coast because few people knew how to shoot birds and they didn't know how to eat bush tucker and didn't eat fish much," he says.

There was no sanitation at the diggings, and excrement leached into the streams and drinking water, sickening many and killing others.

"People didn't keep clean anywhere in the Western world at that time and they were even less clean on the diggings. People stank in the 19th century, something we often forget when we look at costume dramas. Every house would have hundreds of flies buzzing around, and people's armpits would have been streaked with sweat that wouldn't be able to be washed out."

"They were appalling not only for the diggers but for the camp followers. They were very gregarious, very sociable and very dynamic, then often the town would disappear and move on. The very same women and men would be found selling drink and running gambling houses, and in the case of the women, offering sexual services, on goldfield after goldfield throughout the new world," Eldred-Grigg says.

People had known about gold in Otago and other parts of New Zealand for a long time but the concept of a gold rush had not developed earlier.

"When people found gold in rivers in the Coromandel and Golden Bay and Otago, they thought it was an interesting but rather perplexing curiosity. And they would have thought in terms of 'could we establish a gold-mining company to dig holes in the ground?'.

"The notion that large numbers of free workers would gather together in bands and wash the rivers would not have occurred to them. The idea that it could be something that would be democratic rather than commercial or capitalist was an odd and novel notion."

Gold rushes, as they happened in the mid-19th century, particularly in California, Australia, New Zealand, and later South Africa and Alaska, could only happen in an environment where there was a worldwide trade in commodities, communications in the form of newspapers to promote the rushes, and ships to transport people, he says.

Enthusiasm for them was mixed.

Many of the gentry who held the large sheep runs did not want their peace and prosperity disturbed by hordes of miners digging the ground, stealing their sheep, luring away their workers and upsetting the social order. However, businessmen and others on the make were eager to encourage the rushes and eventually offered rewards for those who found payable gold.

South Island alluvial goldfields were ideal for the rushes, as individuals with a small amount of money could go and hope to find gold by digging and washing.

These were known as "poor man's fields" as opposed to"rich man's fields", such as the Coromandel, which needed large amounts of capital to set up mines and stamping batteries to extract the gold from the quartz.

As part of the book, Eldred-Grigg also wanted to look at the Chinese gold-diggers in an even-handed way.

Because the colonial New Zealand State grew increasingly harsh and punitive towards the Chinese, and because large numbers of people in New Zealand came to believe the Chinese were criminal, immoral heathens, leading historians of Chinese in New Zealand such as James Ng and Manning Ip have tended to overcompsensate, he says.

"Chinese diggers used to be seen as demons by mainstream New Zealand and there's now a tendency to see them as angels, not sinners but more sinned against," he says.

But like other diggers, there were good and bad among them. There's also a tendency to overstate the response of the New Zealand State to the Chinese. It was actually slower than Australian states to impose restrictions on them, he says.

"Ironically, it's because we were less democratic than Victoria, New South Wales and Queensland. Where all men had the vote, a colony would pass anti-Chinese legislation.

"Because New Zealand continued to be dominated by propertied people right up until the 1880s, we were less willing to impose punitive legislation because the moneyed tended to favour Chinese immigration as a way of lowering wages, and the white workers of course opposed it on exactly the same grounds."

It was only towards the end of the 19th century, as social Darwinism grew, that ideas of racial inequality and differences between the races in a struggle for world dominance grew stronger everywhere in the Western world, Eldred-Grigg says.

The first wave of women to arrive on the goldfields were there either to sell drink - mostly spirits - or to sell sex, and many did startlingly well.

Towards the end of the century most of the hotels in Queenstown were owned by women.

Women drank and were often drunk - the opposite of the stereotype of the strait-laced colonial woman who belonged to a temperance society, Eldred-Grigg says.

The second wave of women were wives and children who shared the privations and hardships of their husbands and fathers.

Eldred-Grigg is now working on a history of New Zealand during World War 1.

"There are similarities, with large masses of people being swept by a complex blend of reason and emotion. Often the emotions and the rational thought are mutually contradictory, often they don't really know why they are going and what they find when they get there is often not what they thought they would find," he says.

Diggers Hatters & Whores: The Story of the New Zealand Gold Rushes, by Stevan Eldred-Grigg, is published by Random House, pbk, $55.