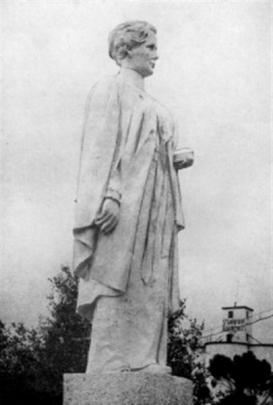 The statue of Dr Margaret Cruickshank in Waimate where she ran a medical practice single-handed during World War 1. Photos from the Hocken collections. 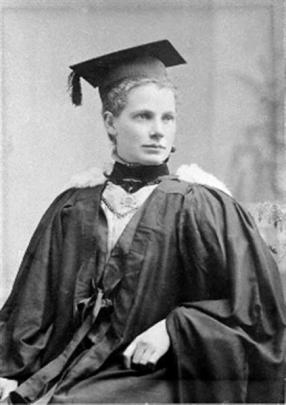 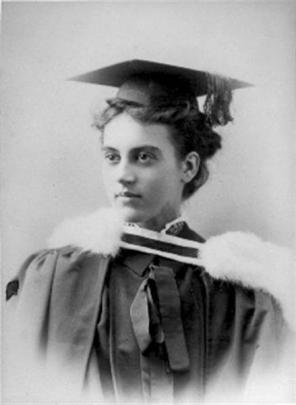 First woman medical student at the University of Otago's Medical School Emily Siedeberg, who began her studies in 1891.

Women had been admitted to Otago University from the outset, with the first graduating in Arts in 1885.

The speaker at her graduation ceremony, Dr William Brown, made an eloquent plea for the entry of women to higher education, including medicine.

The question of women entering Medical School had already come before the Council in 1881, but no decision had been thought necessary, because women were not eligible to complete at Edinburgh.

It was a different matter once the full course was established.

In 1891, just four years after the first man, William Christie, graduated from the school, Emily Siedeberg entered the medical course, followed the next year by Margaret Cruickshank.

The year 1891 was far from a high point for the Otago Medical School.

There were two debates in the June edition of the Review that year, one on whether women should be admitted to the School and the other on whether the School itself should close.

There is no reason to believe that the dean of the medical school John Scott wanted to keep women out of medicine.

He had been a student at Edinburgh in 1870 at the peak of the controversy and violence surrounding the admission of women medical students there.

He would also have been aware that, in 1891, there were 25 women on the British medical register and that the medical schools in Melbourne and Sydney both admitted women; indeed the first two women graduated from Melbourne in 1891.

Furthermore, apart from the University's long-established policy of admitting women, the serious shortage of medical students provided a compelling reason to admit them to the Otago course.

Nevertheless, Scott's attitude to women in his classes gives an impression of forbearance rather than enthusiasm.

Fourteen women graduated while he was dean of the school.

This was a small proportion of a small number of students and within it the pattern of graduations was very uneven.

Siedeberg graduated in 1896 and Cruickshank in 1897, then there was a gap until 1900, when four more women graduated, the biggest group in the period.

There were none at all in the other eleven years.

A graduate of 1916 could justifiably describe the five women in her first-year class as having " appeared at the college just as the authorities thought the craze for women studying medicine had gone".

The admission of women to the School was not generally welcomed by staff, students or the local medical fraternity.

In the June 1891 issue of the Review, "Dunedin medico" asked indignantly, "Why should a woman unsex herself by giving way to a morbid craving which can only be likened to an epidemic of insanity?"

While the early women students may not have had to face the overt hostility that had greeted women at Edinburgh twenty years earlier, the atmosphere in the School was chill.

The main concern of staff seems to have been how to combine teaching with decorum, but there were also episodes of ill-will.

At first, Professor Scott asked Emily Siedeberg to absent herself from two of his anatomy classes.

However, after teaching her separately, he soon moved to inclusive classes.

Eleanor Baker (later Baker McLaglan) who graduated in 1903, describes how the lecturer on public health and medical jurisprudence once stopped in the middle of a class and said to the two women present, "I now come to the part of my lecture that I refuse to give before women. Therefore the women leave the room or I will leave it."

Covered with confusion, and accompanied by the hoots and jeers of their fellow students, the women left the class.

On another occasion, the same lecturer brusquely informed Baker that she had not done well enough in her year's work to sit finals.

In fact, she had come top of her class and he had mistaken her for the only other woman in the class.

The dissection room posed the greatest challenge for the early women students.

The most famous anecdote comes from a former laboratory assistant "Wullie" Goodlet.

After describing the unruly behaviour of the male students, which included running down the stairs brandishing an arm or a leg, and chasing him round the laboratory (which he said was good fun for them and he got used to it), Goodlet commented that Emily Siedeberg had "a very unpleasant time" with her class mates.

"They did not want lady doctors and the lady students have to thank Miss Siedeberg for her pluck in making way for them . . . The young men would throw the flesh at her every chance they got."

Siedeberg herself gave a much less dramatic account of the events, simply saying that on one trifling occasion "a few pieces from another dissecting table came in my direction".

It appears that throwing flesh was not uncommon, however.

In her autobiography, Doris Jolly (later Gordon), who graduated in 1916, describes how students would "let off steam in a meat fight, when hundreds of lumps of dark flesh, skin and scalp went hurtling across the dissection room".

The practice was also confirmed by Bill Anderson, a 1920 graduate, who said that because he was older than the other students, he could never join in throwing lumps of dissected meat about.

In the first years of the twentieth century, there were powerful elements in society hostile to women becoming doctors.

An influential group of senior staff from the Medical School, led by Truby King and Ferdinand Batchelor, campaigned against higher education for women in general.

They argued that it placed too great a strain on them at the most momentous period of their lives and was thus detrimental to the vitality of the race.

In 1909, Batchelor gave a lecture along these lines to an audience which included churchmen, members of parliament and doctors.

He was strongly supported by King, then at the height of his influence as an expert on infant welfare.

Although women doctors, including Siedeberg, sprang to the defence of higher education for women, the influence of the respected experts may well have helped account for the low number of women medical students in these years.

On the other hand, some of the Medical School staff who were hostile to higher education for women in theory, could be kind and helpful in practice.

Eleanor Baker, for example, had reason to be grateful to Truby King, who found a position for her at Seacliff Hospital, with accommodation and a good salary, when she was newly graduated and desperately needed employment.

Reflecting on this in old age, she commented, "It was Sir Truby who probably helped me more than anyone else in my life", adding, "Illogical animals, men."

- edited excerpt from Anatomy of a Medical School - A History of Medicine at the University of Otago 1875-2000 by Dorothy Page.

In connection with the recent launch of Dr Page's book there is a small exhibition of some of the items relating to the early medical school in the foyer of the Hocken Library, including some of Prof Scott's drawings.