Getting back to nature

The children’s play area at Orokonui. Photos: Claire Freeman
Orokonui Ecosanctuary recently opened a play area for visitors’ children. Claire Freeman reflects on the importance of  play in a natural environment for children.

What are the benefits of play in nature? Play with natural materials helps develop the many skills that children will need in later life. Hanging on trees and picking up small sticks or stones, for example, develops the grip and dexterity needed to hold a pen or  manipulate a keyboard.

There has been much concern expressed about people, especially children, becoming divorced from nature.

United States journalist and author Richard Louv has become very well known for his book Last Child in the Woods in which he identifies a trend for children to be less aware of, and have less contact with, the natural world. He coined the term "nature deficit disorder" to describe the ailments he sees in children who lack contact with nature.

This is not a new notion. E.O. Wilson coined a similarly evocative term, "biophilia", to argue that people possess an innate tendency to seek connections with nature and other forms of life.

A third related member of this group is environmental psychologist Theodore Roszak, who identified that the health of people and the health of the planet are mutually interdependent.

Jeugdland Maakland, Amsterdam, Netherlands. The girls on the top right are using tools to construct the fort.
Most New Zealanders recognise the sense in the views of Wilson and Roszak and seek out connections with nature in their daily lives through gardening, feeding birds, going for walks, having a picnic or taking part in environmental initiatives, such as beach clean-ups.

But what about the somewhat pessimistic view of Louv and others around children and the negative trends they identify?

From 2013 to 2015, a group of researchers at the University of Otago addressed this very issue and asked "Do children growing up in New Zealand cities connect with nature and if so, how?" The study interviewed 187 children in Dunedin, Wellington and Auckland, and asked them about their lives, what they thought nature was, and mapped the outside places they go to and what they do there.

The children were asked using an "alien" toy model, to explain nature to the alien, who was new to New Zealand and Earth. They had to explain what nature is, to show where they would take the alien to see a bird, a bug, a significant tree, natural water, a quiet nature place and a wild jungle place. 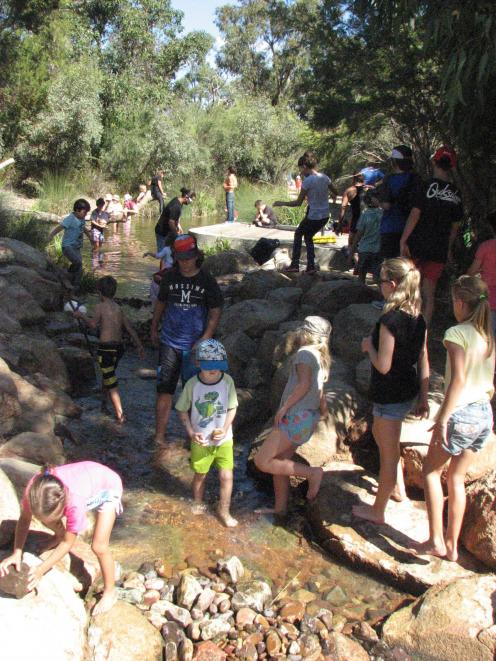 The study found that city children notice nature, they connect with the nature that is around them and enjoy being in natural places. Children who were more socially connected and had friends went outside more and so had greater opportunities to connect with nature.

However, the places children could go to outdoors without adults and to play with friends had declined. Children were not playing in the most biodiverse and natural places such as bush or forest, beaches, by streams or in scrub, rather they were playing on sports fields, at schools, in their gardens and in landscaped areas of parks.

This means that the opportunity for free play in more natural settings is being lost and in this respect, places such as Orokonui are becoming much more important for children as well as wildlife.

There is a worldwide trend to develop more natural play areas for children. Areas that use natural material, such as logs, running water and wood chips, rather than plastic matting, and use natural features, such as trees for climbing. Two superb examples are RioTinto Naturescape in Kings Park in Perth, a free park that is so popular it sometimes has to limit numbers, and Jeugdland Maakland in Amsterdam, where children can construct huge forts from pallets in a natural setting.

It was examples such as these that inspired Orokonui’s nature play area. The play area though is just a start. It would be fabulous if Dunedin could have its own Naturescape or Jeugdland Maakland. Some schools and kindergartens around the city are already embracing natural plantings and using natural materials in their play areas. As children’s freedom to roam declines, places such as Orokonui become more important as children attempt to connect with the natural environment around them.

- Claire Freeman is a professor in the geography department at the University of Otago. She  researches in environmental planning and is an adviser to the  Otago Natural History Trust, Orokonui.