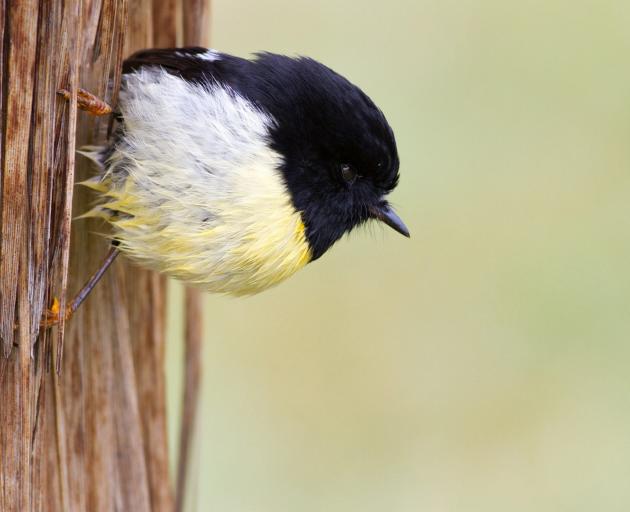 The Tomtit I knew as Bung-eye. Photo: Paul Sorrell
A photographer learns to observe nature in a way most other don't. That brings experiences others miss. Wildlife photographer Paul Sorrell recounts a story that came of many visits to Orokonui Ecosanctuary.

Orokonui contains many stories. Some, like the saga of the sanctuary's takahe, are well known. Others can be told by only a few. Such is the tale of Bung-eye, the one-eyed tomtit.

There are few more careful observers of the natural world than wildlife photographers. Our success depends on our ability to pick up subtle cues in an animal's behaviour, to anticipate action and thus be ready to press the shutter at the decisive moment.

To do this, we become acute observers, not only of the creatures we wish to capture on our camera sensors, but of their habitat. We find their favoured feeding places, where and when they nest, when the young are active and so on.

In addition, there are many practical considerations. For the photographer, the chief among these is light. Thus we set up, not in the depths of the bush, but in forest margins and in clearings, where the light will allow the fast shutter speeds that enables us to capture a moving subject.

At Orokonui, one such clearing is located just above the aviary, on Aviary Rd. Last winter, my fellow photographer, Neale, and I made it a regular stopping place. Encircled by young cabbage trees, and with plenty of low shrubbery, it offered a good variety of cover and perches for birds. Unlike in the bush, there was room for us to move around and light overhead. On the best days for photography, the mellow winter sunlight was filtered by a high screen of cloud, creating a softbox effect.

And the birds collaborated. Small parties of twittering fantails regularly invaded the clearing, and the grey warbler's high-pitched floating melody accompanied our sessions. Then, one Saturday morning, we were delighted to find that a pair of tomtits had taken up residence. 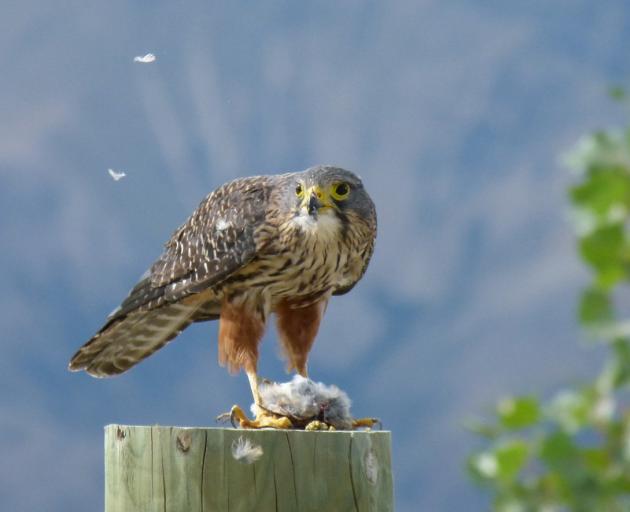 A New Zealand falcon rests on a fence post after swooping on a sparrow. Photo: DONNA FALCONER
Tomtits hunt in a predictable pattern, using the same low perches as they spy out insects and other small invertebrates on the ground. This was ideal for us as photographers, enabling us to set up our tripods and long lenses in advance of their arrival at a particular perch.

At first, our attention fell on the female, with her delicate lemon breast and muted colours. One day when the light was particularly beautiful, she posed on a lichen-decked stump, paused in a makomako (wineberry) tree and landed, featherlike, on stalks of grass. Later, we noticed the showier male bird, whom we named Bung-eye, as he was obviously blinded in his right eye. This caused us a few problems as although we could follow him on his hunting round easily enough, we were constantly forced to manoeuvre so as to capture his ``good side''.

Nevertheless, Bung-eye proved a very co-operative subject, alighting on the cabbage trees and coprosma and manuka bushes and even fossicking for worms after heavy rain. Every half an hour or so, he would pause and let out an abrupt, piercing call. Then he and his mate would briefly come together before resuming the hunt, she in a neighbouring patch that was mainly bush.

Although in our weekend visits we now scarcely saw the female, Bung-eye was always to be spotted on his rounds. We even put up a small natural perch in a position that enjoyed good light and a pleasing background.

But our avian idyll was to change dramatically and unexpectedly. One morning when I was in the clearing on my own, waiting beside our bespoke perch, out of the corner of my eye I saw a large bird swoop towards the ground just a few feet to my right. It was a New Zealand falcon, clasping a small bird in both its talons. Realising that I wasn't in fact a tree, it had thought better of landing and flew off into the bush beyond the aviary.

We knew there were falcons about. Ecosanctuary staff had told us that they had seen them perched in the kanuka branches above the feeder opposite the aviary, attracted by the small birds that gather there, and we had come across circles of feathers in the clearing - just where I'd been standing - that marked it as a falcon plucking site.

These days, the clearing, once a favoured hunting ground for birds and photographers alike, has fallen silent. Birds and their song are rarely detected there now. Have the falcons cleaned everything out? I have heard that a pair is now nesting in the sanctuary and, on one level, this is wonderful news. But it would be a great irony if Orokonui, elaborately fenced off so as to exclude four-legged predators, was to suffer depradation through attacks from above.

But any ecological system needs time to readjust to new circumstances, and only time will tell if the tomtits return.

Postscript: A few days before Christmas, I was in The Clearing (on the Kiwi Track) when a falcon flew out of the forest and streaked along the gravel path, its sleek brown form a compact bundle of pure energy and unswerving purpose. Although I didn't manage to take a photograph, its image was exposed on my retina and is stored permanently in my memory. How could I fail to welcome such a magnificent visitor?