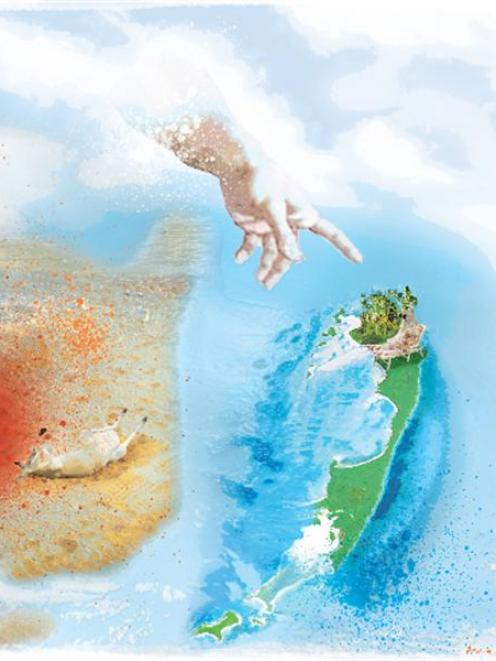 A controversial theory about New Zealand's past has been put to rest, writes Andrew Penniket.

The University of Otago's Castle 2 lecture theatre was recently the setting of a significant event - an iconoclastic geological theory was finally laid to rest in a stirring delivery from some of the country's most respected scientists.

Under discussion was not just an obscure area of academic research but our very understanding of what it is to be a Kiwi, literally. And it would determine not only what a New Zealander is but how we came about and what makes our land so distinctive.

What we now know as New Zealand is the exposed portion of a huge continent commonly called Zealandia. Currently only about 10% of this continent is above water; the rest is submerged and is made up of the Chatham Rise, Campbell Plateau, Lord Howe Rise, Norfolk Ridge and much more.

Some 80 million years ago Zealandia formed the margins of the supercontinent Gondwana, but sea-floor spreading opened up the Tasman Sea and gradually it began to drift eastwards.

Rafting aboard this land, we believed, were many curious animals and plants dear to our national heart - moa, kiwi, kauri trees, tree ferns, native frogs, giant snails (yes some people love them too); as well as some other wonderful creatures now extinct - dinosaurs, freshwater crocodiles and three-horned tortoises.

But as Zealandia drifted off into the Pacific Ocean it gradually broke up and sank. For well over 100 years it has been known that what is now New Zealand was substantially underwater during the Oligocene geological period, about 24 million-34 million years ago. This was the period that produced many of the spectacular limestone formations around New Zealand; the Oamaru landscape and Te Ana-au caves, for example.

It was thought that only a few areas remained above the sea at this time and these became life rafts on which many of the distinctive biota we have today survived as island refugees. Then the titanic forces in the earth's mantle shifted again and a new zone of tectonic activity started up. The fiery area we know as the Tonga-Kermadec subduction zone moved south, tearing Zealandia apart and creating a massive slip fault that pushed up our Southern Alps and created modern New Zealand.

So this was the established theory, but then a few geologists began to raise doubt and, in the 2007 book, In Search of Ancient New Zealand, Dr Hamish Campbell claimed that the geological evidence for sustained land during the Oligocene was very weak. And he went further: ''In the absence of any substantive geological constraints for the placing of a shoreline anywhere within Zealandia 23 million years ago, the inevitable conclusion is that it was empty, open ocean'', he claimed.

''Outrageous!'' cried the biologists (and a good number of geologists). But was this just a storm in a prehistoric teacup?

Definitely not! This was important and the implications were huge. It would mean that New Zealand's biota was much younger than we thought and what is more, as most of the plants and animals would have had to come from the nearest big land mass, much of what we hold so dear would be nothing more than recycled Australians. How could we ever live that down?

So the battle lines were drawn amid heated debate. In the drive to clarify our prehistory and establish our true identity there was a flurry of research. Scientists set about investigating everything from landscapes and rocks to DNA and fossils; and this came to fruition in presentations at the recent Southern Connections Conference (no, not a meeting of escort agencies but a gathering of scientists interested in the biota of the southern continents that once made up Gondwana).

I have to confess more than a passing interest in the topic. In a former life my specialty area of research was the ecology and biogeography of the Placostylus genus of giant landsnails - found in New Zealand and parts of the southwest Pacific. Posing as a born-again scientist, this was one conference I didn't want to miss.

The occasion was a typical Dunedin summer's day, tar melting in the streets. But it was cool inside the darkness of Castle 2, where the anticipation was high. The crowd containing a fair smattering of ologists and ographers, hushed as the first rebuttal was delivered by Dr Alan Tennyson, of Te Papa Museum.

Tennyson gave a summary of the ages of our distinctive fauna, on the basis of molecular research and the discovery of new fossils. He revealed that the moa, kiwi, wrens, Leiopelmatid frogs, our large parrots and wattle birds, among others, are all older than the Oligocene. So if Zealandia was really drowned, where could they possibly have come from, as they are found nowhere else, not even as fossils.

Next came Dr Trevor Worthy, from the University of Adelaide. Dr Worthy has been spearheading the team investigating the ancient Lake Manuherikia fossil deposits at St Bathans. The spectacular list of animals found there includes freshwater crocodiles, frogs, a turtle and even a terrestrial mammal. Also present were freshwater mussels. These sediments date from just after the so-called Zealandia drowning and they contain all of the famous New Zealand endemic animals. It defies logic that all of these animals could appear so soon afterwards and once again, where would they have come from? Score: continuing land believers 2; drowning geologists 0.

Next day the papers came thick and fast. Geologist Dr Nick Mortimer, from GNS, gave evidence on the composition of the many deposits of Oligocene limestone found in New Zealand. They all contained impurities consistent with ongoing terrigenous input - that is, erosion from land. By comparison, limestone laid down in purely oceanic, conditions, such as in the Bahamas and Maldives, are much purer with a higher carbonate content. Conclusion: land was always present.

Another geologist, Dr James Scott (University of Otago), followed up with a fascinating account of a genuine fossilised seashore at Kokonga in Central Otago. While it took a certain kind of vision to realise what it was, sure enough, he showed pictures of a prehistoric rocky coast now deep in the heart of Otago. The adjacent rocks contain fossils of corals and many shallow-water creatures as well as rocks and boulders cemented together as on a seashore, all dating from the time of the reputed MMI (that's maximum marine inundation). This clearly indicated ongoing land.

Dr Daphne Lee, of the University of Otago, then took the podium and introduced us to the concept of nanofossils - the way of the future, she said. Using a combination of nanofossils and strontium isotopes she and her team had aged a number of deposits and identified several ancient shorelines in Otago and Southland at the time of the MMI. They had established that in the south there was at least one large chunk of land covering what is now eastern Otago and the Catlins, but probably including Stewart Island as well. From the abundance of pollen and wood fossils there were evidently extensive forests, swamps, estuaries and possibly even mangroves.

Dr Lee concluded that there was no evidence whatsoever of Central Otago being under the sea in the Oligocene but instead there were substantial subtropical islands with a diverse and extensive biota.

Julie Palmer, of Massey University, came next with her studies of coal deposits in the Waikato and Taranaki. Although there was a gap in the record, because Solid Energy stopped their drilling programme before they reached sufficient depth, her analysis showed that the plant species before and after the reputed drowning were very similar. She concluded that it was highly likely there was a significant landmass throughout the Oligocene in the vicinity of modern-day King Country.

Another geologist, Dr Dallas Mildenhall, of GNS in Wellington, followed up. Coming from the possibly-all-drowned camp of theorists, Dr Mildenhall gave a presentation that included information about how pollen grains change very little through the ages (they are very conservative, as he put it) so that similar pollen from before and after the MMI may not be from the same species.

He suggested the MMI was about 25 million years ago and concluded with the question: how long does it take for a biota to build up after a landmass is exposed? He quoted a former colleague as saying that all you needed was one constipated seagull to arrive in Zealandia and you get everything (by dispersal)! Hmm, maybe not moa, tuatara and huia, I thought.

Finally, Victoria University biogeographer Dr George Gibbs moved forward and drove several large nails, spikes and screws into the coffin of the Drowned Zealandia Theory. Drawing upon research into molecular phylogenetics (building up family trees using comparisons of DNA) Dr Gibbs clearly showed that although the majority of our biota has indeed arrived since the Oligocene (yes, we must face the awkward truth - mostly from Australia) there is nevertheless a significant portion of our plants and animals that have a very ancient lineage and have been in New Zealand all along, ever since our part of Gondwanaland broke up, 60 million-80 million years ago.

This includes the more well-known ancient species such as tuatara and native frogs, but even more convincing is a whole suite of small invertebrates that just don't move much, such as jaw moths, land snails, stick insects and moss bugs.

Perhaps the most convincing evidence for some continued land throughout the life of Zealandia is provided by the humble koura - our freshwater crayfish. Molecular dating tells us it comes from a very ancient lineage and diverged from Australian relatives about 109 million to 160 million years ago. Because their entire life cycle requires freshwater, koura are clear evidence there has been continuous freshwater in Zealandia/New Zealand throughout the Cenozoic (that's from Gondwana days until now). And as we all know, you can't have freshwater without land.

So what does all this tell us? Clearly, there has been some land in New Zealand ever since Zealandia drifted away from what is now Australia. And there has a been a distinctive group of plants and animals living on that land, including our precious tuatara, geckos, kauri, kokako, various obscure insects and snails, as well as the likes of matai and tanekaha.

So now we have good evidence, on the basis of geology and/or biogeography, for a number of islands throughout the Oligocene including in the Catlins and Central Otago, Fiordland, northwest Nelson, the King Country and Northland. And most importantly, we aren't just a country of geologically recent immigrants from Australia!

- Andrew Penniket is a film-maker and restoration ecologist from Central Otago.