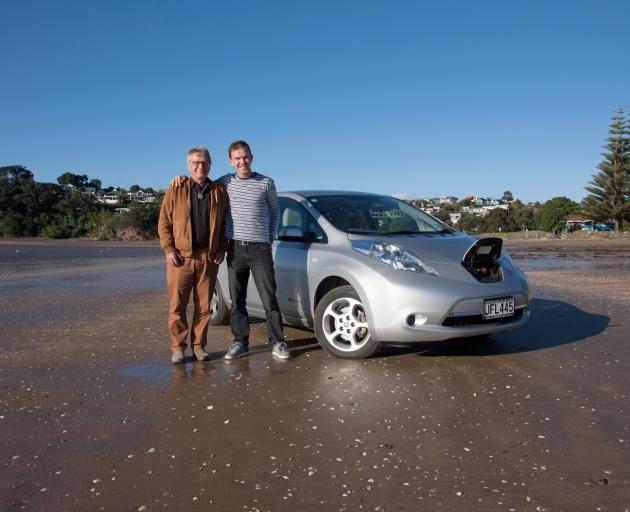 Prof Henrik Moller (left) and Dima Ivanov in Auckland this week, preparing to launch Flip and Fleet, which will better inform the shift to electric vehicles, such as the Nissan Leaf pictured. Photo: supplied

Long before anyone was talking about citizen science, Prof Henrik Moller was inundated by it.

That was back in the 1980s when, in response to a plague of wasps in the Nelson area, he rashly called on the public to send him the flying pests they caught so he could work out how far the problem had spread.

On the first day there were five parcels in the post. Then the floodgates opened and the DSIR, for which he was working at the time, was hit by an avalanche of insects; 98,000 in all.

Still, by the time they’d finished with the wasps, the scientists had written the best part of 20 scientific papers.

Now the long-time ecologist and environmental sustainability scientist is going back to the well of public enthusiasm to help put transport in this country on a more sustainable footing; and tackle climate change.

Moller wants to know precisely how well New Zealand’s fleet of electric vehicles (EVs) are performing in our conditions, to inform those thinking of making the change.

It’s a project he describes with genuine enthusiasm, but as someone who previously had no interest in cars whatsoever, he stumbled into it, he says.

After years of "conscientious objection to Facebook", Prof Moller says he logged on when considering buying an electric car himself, in order to tap into the collective wisdom of contributors to a local EV owners page.

What he found, among the gold, was a fair bit of entrenched thinking, and a lot of opinion based on overseas experience.

So that was that.

In June last year the pair developed a simple platform and entered their own two cars. Since then, a growing number of interested test drivers have also begun to collect and contribute their EV data to the Flip the Fleet "Fitbit for cars" project. Last count: 134 drivers.

A year on, and the world-first Flip the Fleet project has been launched publicly with the aim of getting as many of the country’s 3400 EVs involved, to build the case for people weaning themselves off fossil fuels. It comes as rapid-charging stations roll out around the country to serve EVs, most recently in Hampden.

Prof Moller’s not alone in backing the EV as an important part of this country’s climate response.

Parliamentary Commissioner for the Environment Dr Jan Wright has described electric cars as a "no-brainer".

"Carbon dioxide emissions from vehicles are a big problem and getting worse. Electric cars must be part of our future," she said.

Automobile Association principal adviser Mark Stockdale says drivers should ditch petrol and go electric for all but the longest trips, on cost alone.

Prof Moller, who has been working on Flip the Fleet as part of his business Ecosystems Consultants, said the growing phenomenon of citizen science is about the qualified scientific community tapping into a knowledgeable and motivated citizenry, in the service of science.

"If you can organise  people and find ways of, first of all, gathering the information, but more importantly getting their knowledge into play on what the numbers mean, then you can go a long, long way."

New Zealand’s EV owners have had to work out how to integrate electric vehicles into their lives and their work patterns and holidays, but also how to deal with the relatively sparse infrastructure and support, he says.

Innovation and change in society and technology tends to move out from the early adopters who learn about a new technology and prove it works, which is what is now happening with EVs.

"So far electric vehicle owners in New zealand are showing exactly that mixture of courage, ingenuity and knowledge.

"All Flip the Fleet is trying to do is collect that together and spread the word more quickly to those who are still hanging back."

During its beta-testing phase, Flip the Fleet signed up the Dunedin City Council’s electric fleet, the Otago Museum and Otago Polytechnic’s electrics, alongside a significant portion of Otago’s privately owned electrics. Otago Museum also gave Flip the Fleet a seeding grant from its Participatory Science Platform, which in turn is supported by the Government’s Curious Minds grants.

Prof Moller has been driving his EV, a Nissan Leaf, for more than a year and among the savings he’s made are $15 trips to Christchurch.

"I get a nice smooth ride, it’s quiet, I can think and have a good excuse to pick up a couple of lattes along the way while we fast charge," he says.

In the process he’s saved a couple of kilograms of CO2 pollution.

Bottom up tools such as Flip the Fleet are particularly important for promoting sustainability in New Zealand, Moller says.

"These are incredibly important and powerful, particularly in a New Zealand policy context where our neoliberal approach leads to very passive and inadequate leadership from our Government for bringing about improved sustainability."

While there is little in the way of practical Government support for EVs here, in Norway if you are in an EV, you don’t pay road tolls or for parking and get a government grant for buying the car in the first place. And building regulations there mean all new homes must have electric vehicle charging infrastructure.

In New Zealand too much is being left to he market, in a situation where a kickstart  could incentivise changes that benefit us all, Prof Moller says.

"Electric vehicles are a classic example of that. The community gains and the national economic gains would be enormous by encouraging low emission vehicle uptake."

In a broader sense, New Zealand faced difficulty reining in the methane and carbon pollution involved in its two big industries, farming and tourism. Therefore it needed to be doing whatever it could in other areas to contributed to climate change mitigation efforts.

"We need to get more efficient in the use of our energy and our carbon.

"EVs are a great first step that just about anyone could take up for most uses in New Zealand."

• People spend five minutes at the end of every month uploading data from their dashboards into a nationwide Flip the Fleet database.

• Then they get reports back on their computer screen, within milliseconds, telling them how far they have travelled, how much money they have saved, and how many kg of CO2 they have avoided discharging into the atmosphere, among other things.

• Soon, Flip the Fleet will be able to report what the savings mean in terms of virtual trees.

• For more information go to flipthefleet.org.