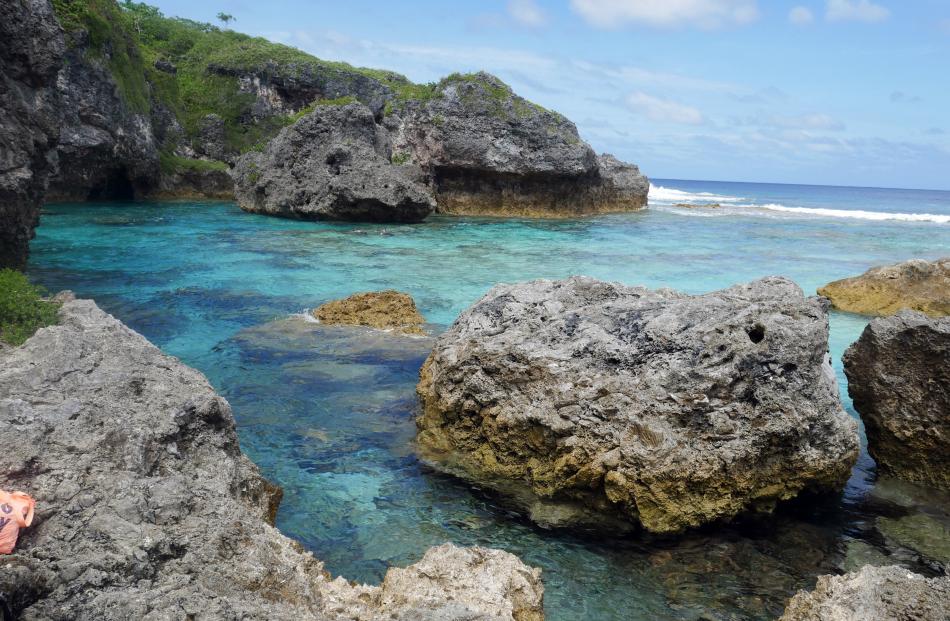 The channel at Limu Pools. 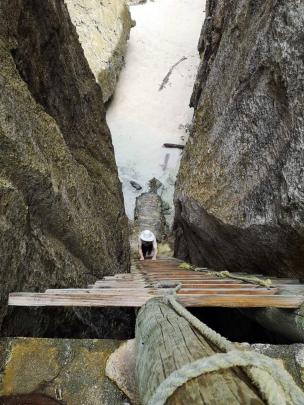 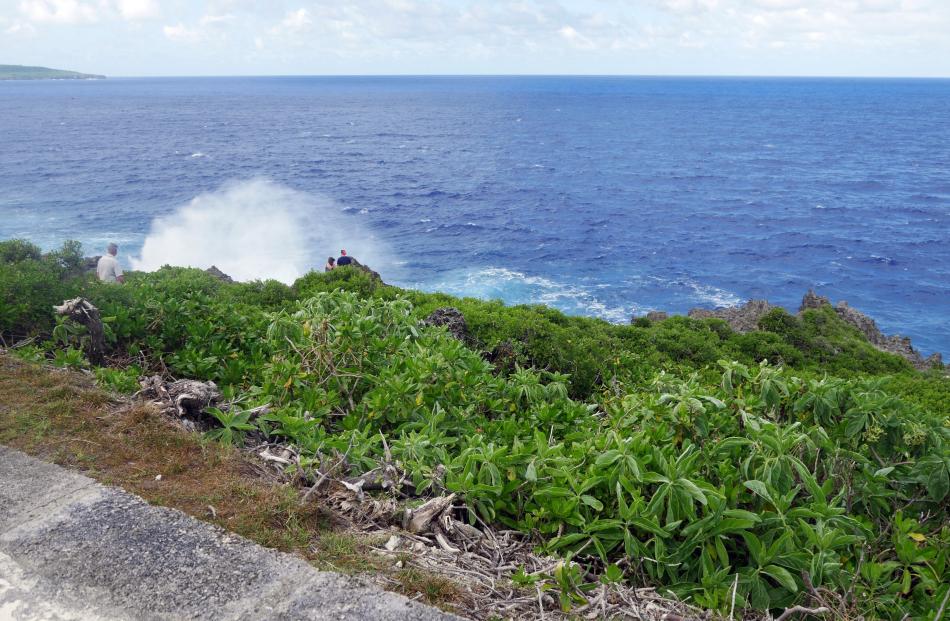 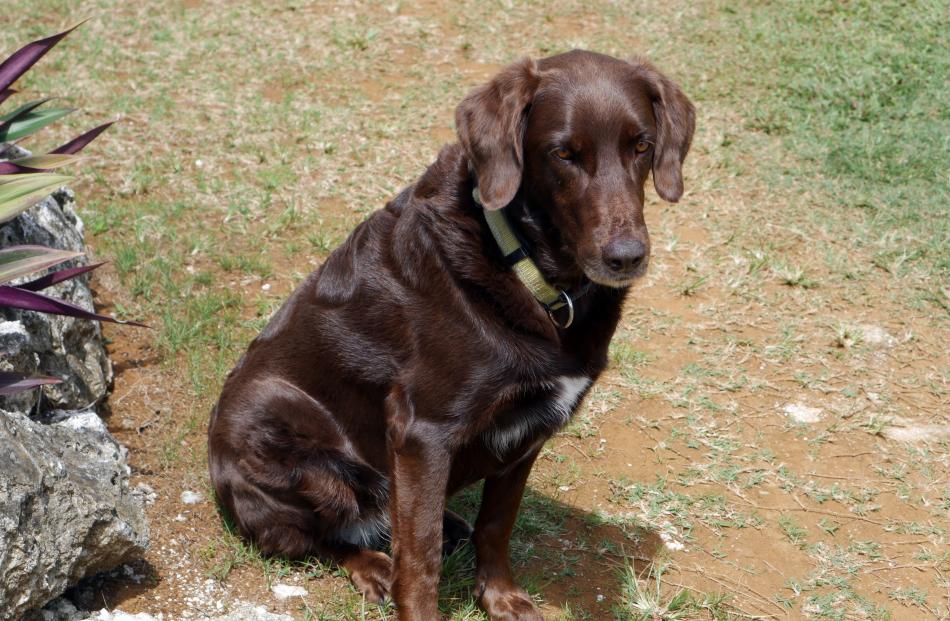 There more to Niue than meets the eye, writes Bronwyn Hegarty.

‘‘Fakaalofa lahi atu’’(Welcome to beautiful Niue) was festooned above two smiling women in colourful dresses handing out guidebooks as we arrived at the airport.

Frangipani season for me meant leis and being entertained with music. Those delights were being saved for the ministers of tourism and their entourage arriving on the next flight for the 29th Council of Tourism meeting.

Ross, our host from Namakulu Cottages, where we would stay for the next 10 days, met us at the airport and we followed him in the rental car he had organised. A car is the best way to get around as Niue does not have public transport. 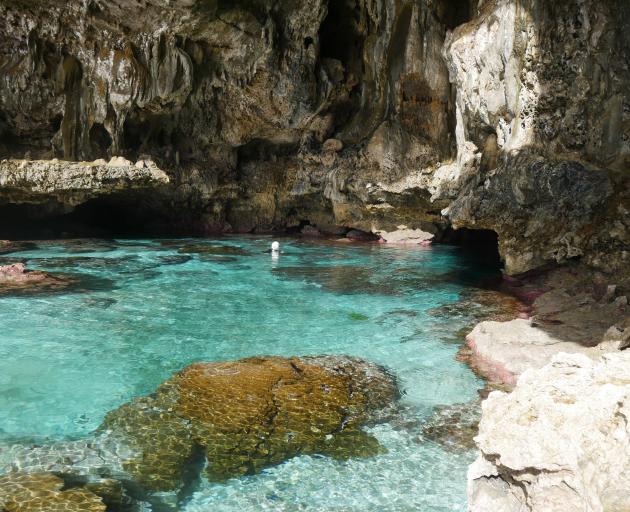 Avaiki pools, the bathing place of Kings. Photos: Bronwyn Hegarty
On the way to the north end of the island, we learned a lot about dodging potholes. We got quite good at it by the end of our holiday. Going slowly is the preferred modus operandum on this tiny island and we soon got into the rhythm, keen to avoid the many sleeping or wandering dogs and hens with their chicks.

Ruby, a beautiful chocolate lab, was waiting to greet us when we arrived. She kept to herself most of the time, but liked to check out the barbecue smells at teatime.

During our time at Namakulu we made great use of the swimming pool and it was a lovely environment for relaxing. The number of other tourists staying at any one time is just right and each cottage is very private. A bonus was the absence of ‘‘dawn o’clock’’ roosters.

The potholes told an interesting story about the social fabric of Niue. Sadly, large empty plastic bitumen containers are dotted along the edge of most roads as remnants of New Zealand’s past assistance to repair the roads. Now the locals patch up holes in the road with a mix of limestone, easily dissolved in heavy rains, and coconut husks. 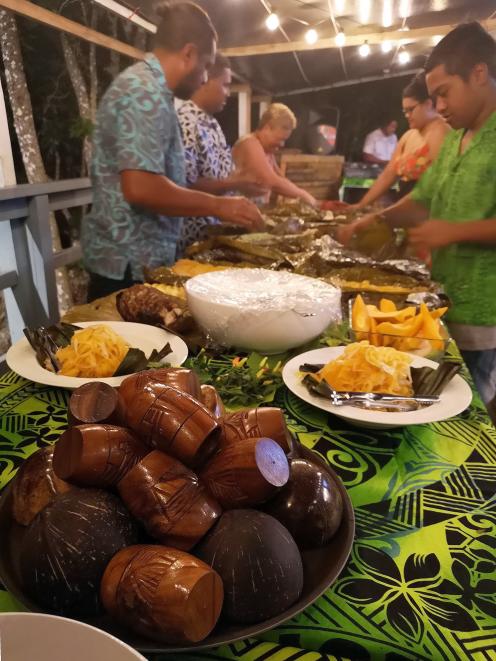 Traditional feast cooked in an Umu oven.
Niueans take great care to keep the roads safe by cutting the lush grass along the edges. We learned that Niuean officials are welcoming an offer from the Chinese Government to fix the roads. A memorandum of understanding for the Belt and Road Initiative has been signed, and this will also include renovations to some wharves. Some people are wary and others seemed to welcome the funding.

So why visit Niue? I was attracted by the unspoilt potential of this island in the Pacific, and wanted to chill for my birthday.

It was the best gift ever. This beautiful tropical island with a very small resident population and few tourists oozes authenticity. Restricted access is helped by the biweekly Air New Zealand flights. The experience is not a Robinson Crusoe or Castaway kind of realism but a gradual immersion in the culture.

Niue has the gentle respectful air of a people who love their place in the world. We found it easy to meet and chat with the locals, and also other tourists, at cafes, the market and in the shops and villages. Visitors are welcomed to church services and to assemblies at the local schools. Touring with some of the local guides was the best way, from our perspective, to begin to understand the island and to experience this unique part of the Pacific.

A highlight of the trip was the orientation tour we took with Keith from Niue Tours the day after our arrival. Keith’s schoolteacher background quickly became apparent. He knows a lot about the geology and history of the island and his stories were mesmerising. 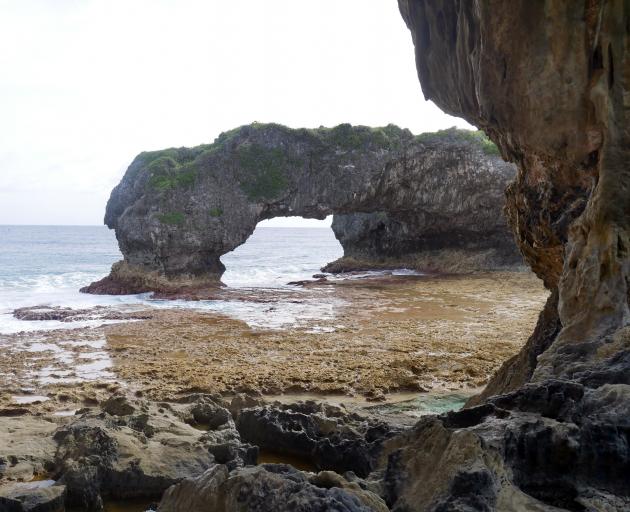 Tavala Arches at low tide.
We found out this small coral atoll is surrounded by cliffs and reefs. While no streams contribute to the lushness, the plentiful rainfall is collected in a giant caldera-shaped rainwater reservoir lined by volcanic rock and limestone, acting as a natural filter. Water is pumped to the surface and considered safe to drink. When the power went out several years ago the island was without water for days, spurring on the New Zealand government to install community rainwater tanks.

Keith and Sue have been operating Niue Tours for several years and provided us with a helpful visual guide they produced (niuetours.com). During the four-hour tour we stopped at many of the action spots on the west side of the island, walking and snorkelling.

Keith kindly lent us gear we could keep for the entire 10 days. We thought about discovering Niue on our own but were so glad to have this introduction to Niuean environment and society.

An early highlight was Anaana Point where we got close to the spectacular show of sea spray from the blowhole. Here we got our first glimpse of ancient coral fossils and the sharp limestone rocks that make up the island.

Matapa chasm, originally the bathing place of kings, was our first snorkelling adventure. This pool is deep, full of colourful creatures and great at any tide. The sea track down to the chasm is steep and rocky, winding through bush and opening into an amazing cave.

‘‘An older woman fell here on one of my tours,’’ explained Keith, ‘‘and injured herself badly.’’

I declined his offer of trekking poles, feeling confident in my new walking shoes.

At this chasm, cool freshwater and seawater mingle, providing a refreshing swim in the heat. We quickly honed our snorkelling skills and rejoiced, while scrabbling over rocks, in the reef shoes we had brought with us. The coral is sharp! We were warned, ‘‘wounds will fester in this heat.’’

Snorkelling is a buzz in Niue. At Avaiki pools, another royal bathing spot, we meandered inside a huge multi-hued cavern snorkelling, and then floating so we could look out to the reef and get a sense of what the royals would have seen. This pool is best reached at low tide, allowing a view of the mass of different coloured corals everywhere and huge sea cucumbers lolling in the shallows.

Even more varieties of corals and fish were discovered in Limu pools a few days after the orientation tour. This was a great spot for viewing the prolific sea life, and best visited at mid tide. If only we’d remembered the Go Pro! The current was stronger crossing the main channel so we turned back, and thankfully missed out on a sea snake experience. ‘‘They don’t bite,’’ others said. I wasn’t convinced.

Going walkabout through the jungle was another adventure.

Neighbouring the Matapa chasm is a track to Tavala Arches, a one-hour return walk. By now we were getting good, in our sturdy walking shoes, at negotiating the many sharp limestone rocks and tree roots prevalent on all the bush tracks. It was hard to imagine how the first people of Niue walked here in bare feet. When we emerged from the cave at the end of the bush, the view of the arches with the sea crashing around them took my breath away.

Nuie as an island of cliffs has chasms everywhere.

Toga chasm (pronounced Tonga) is a must-see place and according to the official Niuean Tourist guidebook, is ‘‘not for the faint-hearted’’. Access is in the south and on the less inhabited side of the island. It took us around 30 minutes to walk through the bush before reaching the large and jagged limestone outcrops near the sea.

Locals have smoothed a path across the rocks and added ropes, as a fall means lots of cuts and abrasions. The wooden ladder down into the chasm is the crowning moment. My husband thought so too, as he took multiple photos of my descent and ascent, probably wondering if I would make it. Later on, we found out our tour guide had helped construct the ladder, carrying the heavy poles to the site and securing them.

At the bottom of the ladder is a shallow pool we had to wade through before reaching a lovely sandy alcove where we discovered empty coconut husks, evidence that uga (coconut) crabs were living there.

We got the chance to hold and then taste uga at a cultural feast at Hio cafe. My cringe moment was seeing the huge crab stuffed into a pot of boiling water. It did taste good.

A local family cooked the feast in an umu: sea snails (whelks), taro, papaya, raw and cooked wahoo (also called paala), local pork and delicious layers of taro and papaya cooked in coconut milk. This along with traditional dancing and the company made for an excellent evening.

Accommodation
Check the official Niue Tourism site (niueisland.com) and the Go! Niue app (available from the Apple Store and Google Play) for information about quality-assured properties.

Cafes and restaurants
Many cafe and bar options are available and opening hours vary.  The Tourist Information Centre can help with this.  Recommended places are: Hio cafe at the North end, Gil’s Indian and the Crazy Uga in Alofi, Vaiolama on the way to the airport, Kaiika Sushi and Gourmet Cuisine (authentic Japanese food and pizza) and Washaway cafe (Sundays only) further south.

Food and what to take
Most imports come from New Zealand and are more expensive.  We took a chilly bin with some goodies.  As long as the food is properly packaged and you have a receipt of purchase you should be fine. Fresh local produce (e.g. cabbages, lettuce, cauliflower, taro) can be bought from the local supermarket and the early morning markets that run two or three times a week.  Eggs were hard to source. 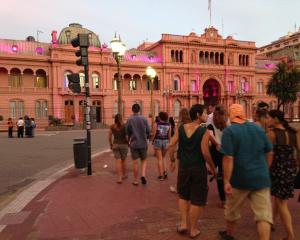 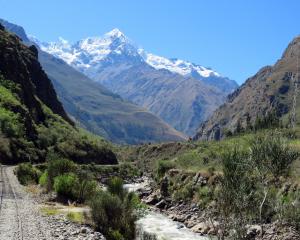 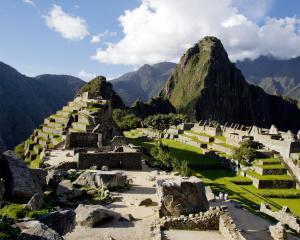