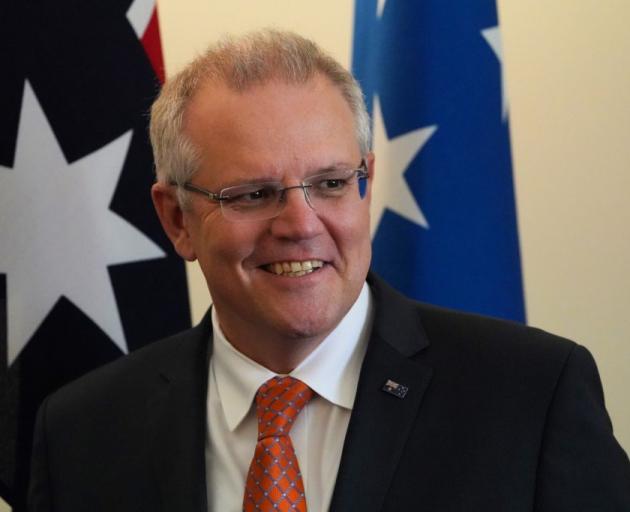 Prime Minister Scott Morrison has pledged AU$130 billion over the next six months to help Australians who have found themselves out of work. Photo: Getty Images
New Zealanders living in Australia on 444 visas will be able to access the AU$1,500 fortnightly payments, the Australian government has confirmed.

Australian Prime Minister Scott Morrison said he had spoken with Jacinda Ardern about the arrangement.

Thousands of New Zealanders who found themselves out of work were forced to leave Australia after finding they were unable to access Centrelink payments.

The 444 visa is a temporary visa that allows New Zealands to visit, study, stay and work in Australia, as long as they remain a New Zealand citizen.

The changes were announced this afternoon, as part of a new government package to aide those affected by Covid-19 in Australia.

Morrison has pledged AU$130 billion over the next six months to help Australians who have found themselves out of work.

He said the AU$130 billion was to "support the jobs and livelihoods of the almost six million Australians who will need that lifeline in the months ahead".

The Australian government is also introducing a AU$1,500 "Job Keeper" payment, which New Zealanders on 444 visas will be eligible for.

Businesses will be paid up to AU$1,500 a fortnight, per employee, for the next six months.

The payment will be a flat rate of AU$1,500, regardless of how much they had previously been paid.

Earlier on Monday, Prime Minister Jacinda Ardern said she had spoken to Australia's PM Scott Morrison that morning and had again pushed the case for New Zealanders to be covered by any job scheme.

"It is a group I am concerned about. I have seen ongoing reporting of some of the issues that they're facing, and I see this as a unique situation. For me, this is a particular set of circumstances that I'm very keen to find a way to address."

Last week she had criticised the decision to leave New Zealanders out of some Covid-19 support packages, because New Zealanders do not get welfare benefits in Australia unless they have become citizens.

Australians do qualify for those benefits in New Zealand, and Australian workers here are also covered by the Covid-19 specific support measures.

Ardern has been highly critical of some of the Australian policies affecting New Zealanders, especially the policy of deporting those convicted of sentences totalling more than two years or on character grounds.

"If anyone falls on a hard time, it's the same hard time," Morrison said.

Morrison said the Job Keeper payment was "to keep Australians in their jobs even when the work dries up".

According to Australian Treasurer Josh Frydenberg, the payments would also be available to part-time workers, sole traders and casuals who have been with their employer for 12 months or more.

Payments will flow from the first week of May but will be backdated to today. Employees stood down since March 1 will be eligible.