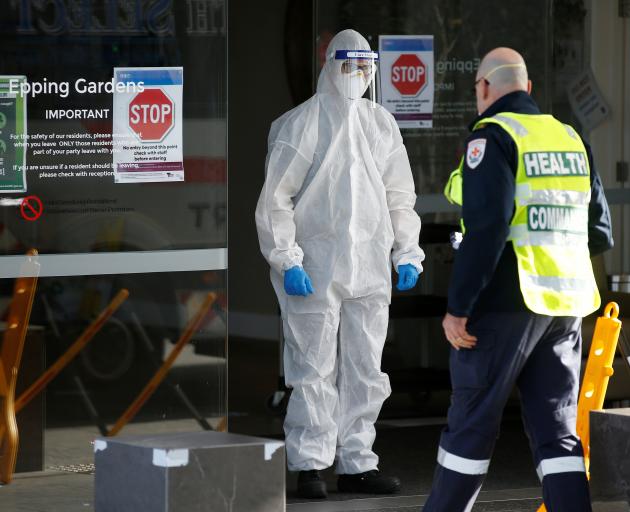 Medical staff and a health commander at an aged care facility experiencing an outbreak of Covid-19 in Melbourne, Australia. Photo: Reuters
Melbourne is going into lockdown tonight, as part of sweeping new restrictions to try to stop the rapid community spread of Covid-19 in the Australian state.

Victoria Premier Daniel Andrews has just announced the measures saying another 671 new coronavirus cases had been detected since yesterday and seven more people have died.

Six of the deaths have a connection to aged care.

Andrews said there have also been 760 "mystery cases" or active cases where officials have not been able to trace back the source of that person's infection.

He said community transmission was the state's biggest challenge and with that number of cases it was necessary to go further and harder with restrictions.

A state of disaster will be imposed from 6pm across the state of Victoria, in addition to the state of emergency that is already in place, Andrews said.

He said that will give police additional powers to be able to enforce the level 4 lockdown.

Andrews said the stage 4 restrictions being introduced in metropolitan Melbourne will mean people cannot be more than 5km from home for the purpose of shopping and only one person can go shopping once per day.

Recreational activity will no longer be allowed, except for one hour of exercise no further than 5km from home, in groups of no more than two people, he said.

The new restrictions also include a night-time curfew in Melbourne between 8pm and 5am.

Regional Victoria will be moving to level 3 restrictions from midnight next Wednesday, Andrews said, and that will mean that bars, restaurants and gyms will need to close.