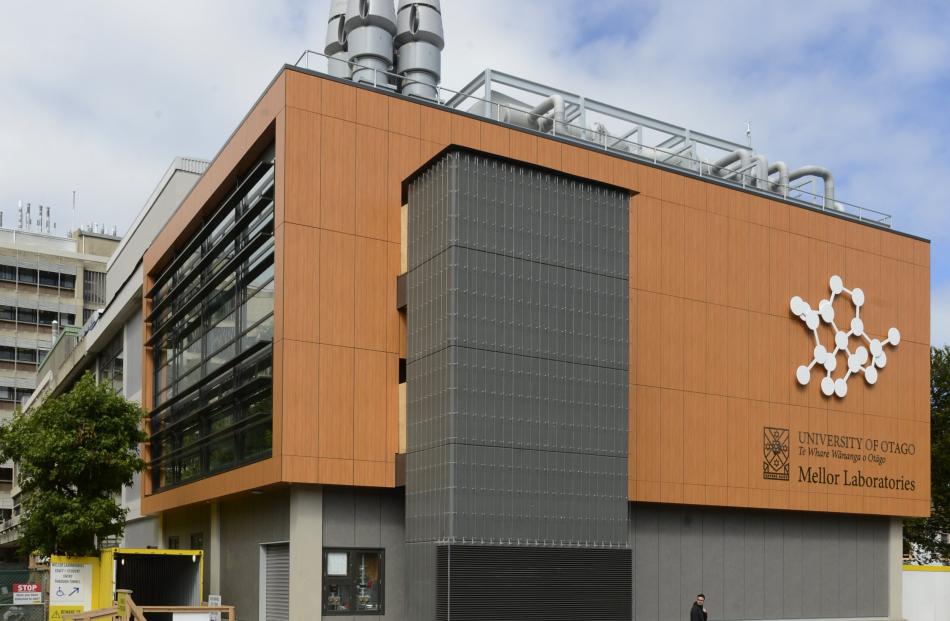 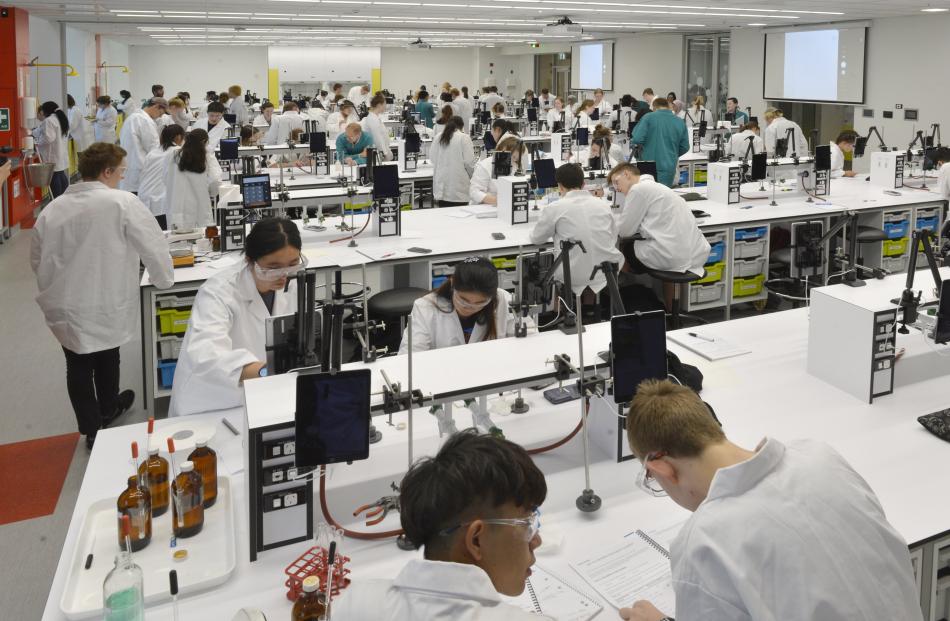 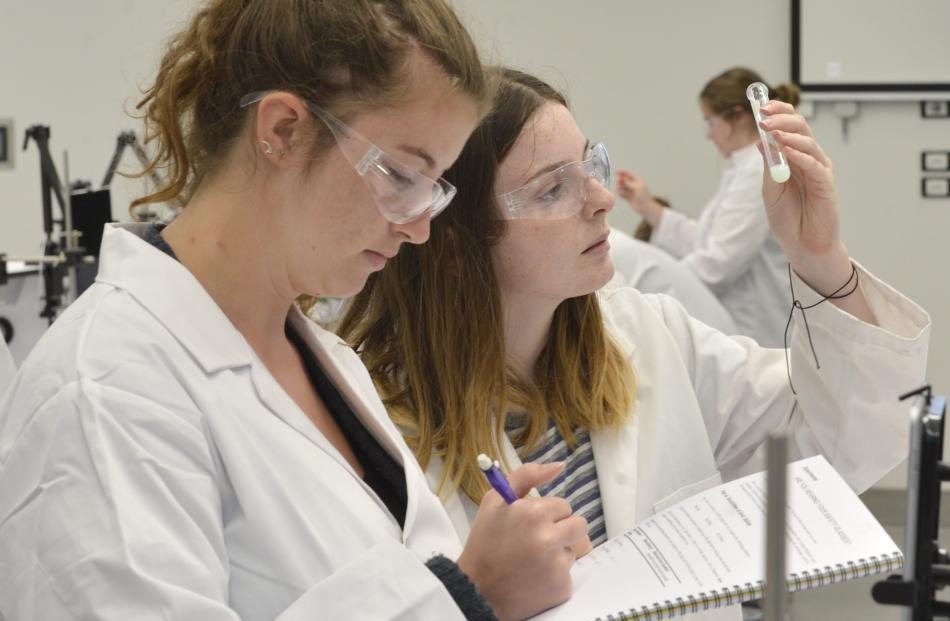 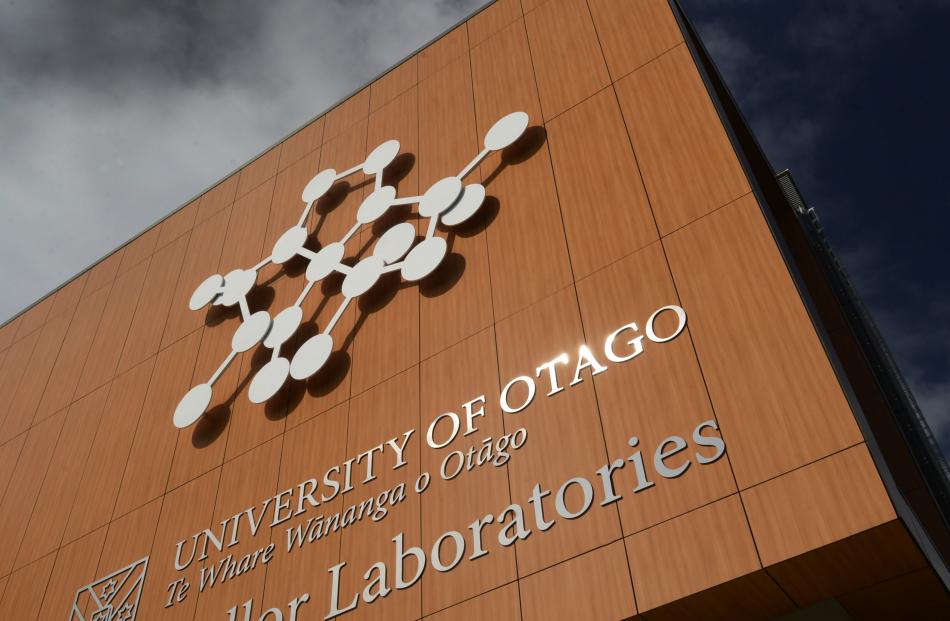 An artist’s impression of the molecule Laurenene adorns the front of the Mellor Laboratories building. 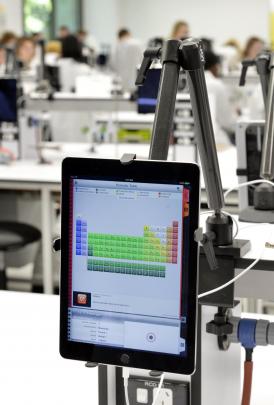 Each new lab station includes an iPad, on which the students will be able to complete tests and can access course resources.

The University of Otago’s chemistry labs have gone from antique to high-tech and tertiary education reporter Vaughan Elder was this week given a tour of the  Mellor Laboratories  building after the completion of the first half of a $56million  makeover.

Mellor Laboratories  is a hive of activity. A class full of bright young minds — many in the first  gruelling year of health sciences —  are experiencing their first chemistry lab.

Chemistry department head Prof Lyall Hanton was full of enthusiasm about how the old grey building had transformed into probably the best university lab in New Zealand.

"I didn’t know that they could turn this ugly old building into this real swan.

"Everyone associated with the project, from Property Services, the architects [Parker Warburton Team Architects with Lab-Works Architecture], and Leigh’s Construction and their subcontractors have been wonderful to work with and they have all done a marvellous job to complete on time," Prof Hanton said.

The just-completed half of the building, named after Joseph William Mellor, features a flexible ‘‘super-lab’’ for 112 students, which can be divided in two, iPads at each lab station and the latest scientific equipment.

A massive ventilation system in place of a chimney  shoots gas from the lab 50m in the air at such speed the Otago Rescue Helicopter Trust had to be notified because it could disrupt a helicopter flight.

Prof Hanton said the new learning environment was a "quantum leap" over the old.

"It’s been a long time since the university spent any money on this building and you can see they have done a stunning job."

The new equipment meant teachers no longer needed to speak over the sound of running water — which was now silently vacuumed away and recycled.

No expense had been spared, which went right down to the "bit of bling" on the front of the building —  a lit-up artist’s impression of the molecule Laurenene.

It was also spacious enough for teachers to walk up and down and keep an eye on the work students were doing.

Health and safety had also been upgraded, with three safety showers in the super lab, in case someone was exposed to a dangerous chemical.

Prof Hanton said such a scenario was unlikely.

"The one time someone should have used a safety shower in our research lab, she was a female and her clothes were dissolving on her, but she didn’t want to strip off in front of her male colleagues."

He hoped the new environment would prove to be a great recruitment tool and encourage first-year students to go on to study chemistry.

Returning students were also glowing about the refurbished building, with one saying working in it made him feel like a "real scientist".

When asked to comment on what the labs were like before the students described them as "rustic" or "antique".

The lighting automatically changed depending on the time of day and what the building was being used for, Mr van de Klundert said.

If a safety station in the lab was used Campus Watch were automatically notified.

The company was proud of what it had achieved and was keen to do more work in Dunedin, Mr van de Klundert said.

"We are here for the long term and we want to grow in the Dunedin market."