The large group of pupils from 27 schools, from as far afield as Balclutha and Waikouaiti, and wearing orange high-visibility vests, walked, via George St, from the University of Otago Dental School to the Octagon.

There they were warmly thanked for their efforts by Dunedin Mayor Aaron Hawkins and Senior Sergeant Craig Dinnissen, of the Dunedin police.

As Mr Hawkins read out the names of attending schools, pupils from each school acknowledged their presence with an enthusiastic roar. 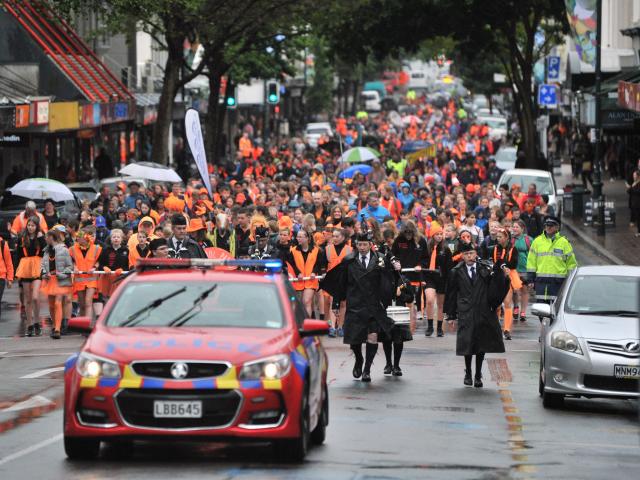 "These are the kids that go out each morning, each afternoon and making sure that when other kids from school use the crossings, they're in a safe environment.

"So they put out the lollipops on a daily basis and just making sure the motorists passing the school are aware that it's school end-of-day crossing time," he said.

The youngsters were then treated to a swim at Moana Pool and a barbecue lunch, during the annual gathering, which is organised by the police and Dunedin City Council.

Sariah and fellow year 8 pupils at the school Naomi Powell and Jessica Guyton said it had also been good to meet pupils from other schools.

The school’s teacher in charge of road patrol, Sheryl Morton, said the "thank you" parade and celebration was a "lovely event".