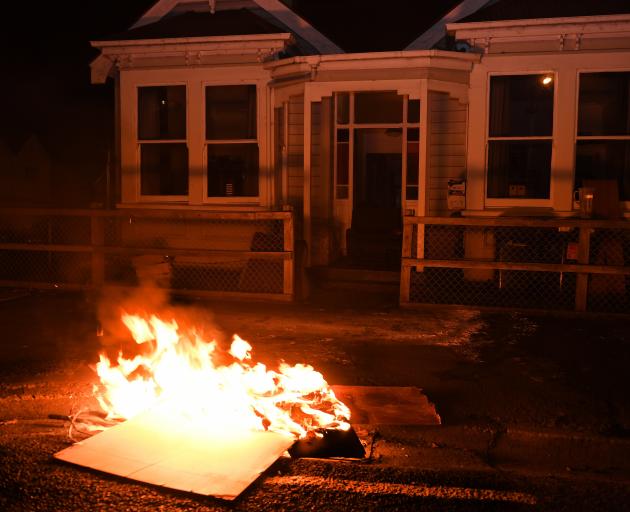 Cardboard burns in Dundas St last week. PHOTO: STEPHEN JAQUIERY
Couch burning has made a comeback at the University of Otago.

After falling to a low of 14 fire incidents in 2018, the number of fires recorded by the university more than tripled to 48 last year, in a trend provost Ken Hodge called "very disappointing".

"Despite the best efforts of the proctor and Campus Watch in preventive and educational work regarding fire-lighting, the message is still struggling to sink in with a small minority of students," Dr Hodge said.

The fire incidents detailed in the university’s discipline report for last year include a second-year student who set an armchair on fire using accelerant before giving a false name to Campus Watch and running off.

That student, who had been in trouble with the university before, was punished with exclusion from the university for the second semester of last year.

"This behaviour is dangerous, causes damage and needlessly ties up emergency services.

"We are working with the Fire Service again in 2020 as we have for several years with an education campaign for students around this dangerous activity and fire safety in general."

Mr Scott said the university had largely been satisfied with behaviour during this year’s
O Week, but there continued to be problems with non-students coming into the student quarter and causing trouble.

In the report, Mr Scott said largely thanks to the introduction of CCTV, more fire-lighters were being caught and held accountable.

He also commented on the continued trend of students, largely second and third years, returning to Dunedin a week earlier for "Flo Week", or flat orientation week.

Mr Scott was also concerned about the growing popularity of the Agnew St keg party, which is held in August.

The event had grown from a smaller localised event that several hundred attended, to a "large street party involving thousands".

There was discussion with community partners and Otago University Students’ Association about the future of the event this year.

While the number of fires had risen significantly, the total number of incidents dealt with by the proctor had stayed relatively flat, increasing from 875 in 2018 to 891 last year.

However, the number of students dealt with by vice-chancellor Harlene Hayne for serious misbehaviour significantly increased and three students were punished by being excluded from campus for a semester.

All up, the vice-chancellor dealt with seven cases last year compared with none in 2018.

Ah, the finest minds of a generation....destroyed by couch.

'serious misbehaviour significantly increased and three students were punished by being excluded from campus for a semester.' Just kickem out- permanently. We don't want vandals wrecking our city. If serious misbehaviour is treated so lightly it will continue.