Doctorate was worth the wait for John 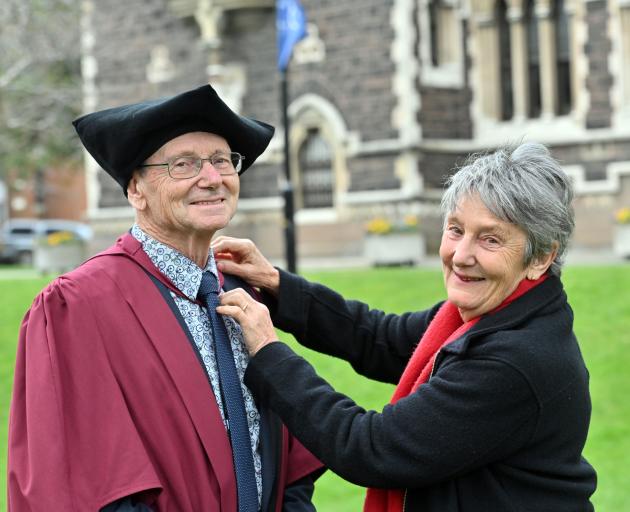 "I'm feeling excited that I've realised an ambition from my 20s to complete a PhD, when for many years I thought I couldn't," he said.

Graduation was "a major step forward in my career as a public health researcher and advocate".

Apart from the rare double of celebrating his 74th birthday and gaining a doctorate, little else has been predictable about Mr White's doctoral studies, which began eight years ago.

Unlike most scholars, he did not start these studies until he had retired, after a long career of government department policy report writing and senior administration.

His biggest challenge came when his late wife, Robin White (nee McPherson), who grew up in Otautau, was diagnosed with terminal cancer in May 2015.

He took three years off from his studies, first to care for his wife until she died in November 2016 then to think through his future.

"It's the best possible thing, when you're getting over the death of someone you've lived with for three-quarters of your life, to have something that you can get back into that absorbs all of your interests, and you get on with life."

Mr White's first degree was an Otago BA in education gained in 1970.

He is grateful for the "tremendous" support he received from the university, including his Otago doctoral scholarship.

He has dedicated his thesis to his wife, who inspired him to research about "changing the food to make healthy choices easier".

Mrs White was executive officer for a now-defunct non-governmental agency, Fight the Obesity Epidemic (Foe), which he joined in 2003, initially to help her with the accounting.

Foe's aim to make the overall food environment healthier led him to do the PhD, he said.

His doctoral research focused on the health star rating system, seen on many supermarket products.

This was "a step in the right direction" but had some major flaws, which should be improved.

High-sugar breakfast cereals, which were not a healthy choice, could nevertheless have a relatively high number of stars because some food manufacturers added nutrients.

Yesterday, Mr White had a "lovely lunch" with his twin sister, Joyce Carswell, of Auckland, at the Otago campus, to mark their birthdays.

"I have a great sense of accomplishment to have completed the PhD, and one of the reasons is because it was the single thing that Robin most wanted for me.

"I want to use my skills to make New Zealand a healthier place."