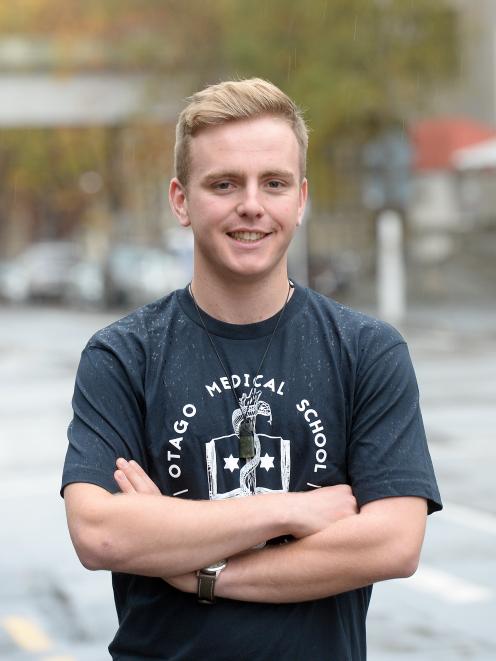 The Otago University Medical School Association has just started the new group Men in Med, which has attracted interest from about 180 students on social media.

Organiser John Laurenson (20) said the idea was students could forge friendships through activities where alcohol was not the main focus.

Eventually Mr Laurenson hoped to get a "workforce" of medical students out volunteering around the city.

"We can put them to use and do some really cool stuff around Dunedin. The best way to lift yourself up is to lift someone else up," Mr Laurenson said.

Doctors were in a high-stress job and were at risk of developing problems such as burnout and depression.

"We know that in New Zealand suicide is [also] a bigger issue for men," Mr Laurenson said.

"It’s hitting those two risk groups at once."

The drinking culture among university students was like "going to the movies and then eating all the popcorn you physically can" rather than enjoying the movie,  and the group also wanted to "flip that on its head".

The bulk of the feedback he had received from students was positive, although there had been a complaint about women not being included, Mr Laurenson said.

OUMSA president Chris Wang said he was aware there were concerns the group could become an "old boys’ club" but that was not the intention.

Medical students were all at an increased risk of stress, and one of the reasons for having an all-male group was young men tended to be less likely to talk about mental health. OUMSA would be keeping a close watch on the group to check it was effective, and did not want to encourage sexism or racism, he said.

"We are definitely open to getting more feedback."

The group had already secured sponsorship from local business The Poolhouse Cafe and Bar, in the form of discounted prices. Medical students already had a number of other volunteering initiatives going on, including an annual "Teddy Bear Hospital" for young children which was being held at the university’s Hunter Centre later this month , Mr Wang said.