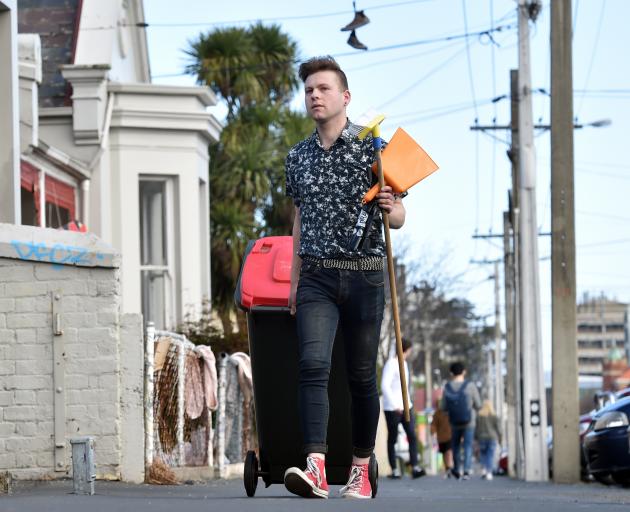 Matthew Schep, co-leader of Students for Environmental Action, helps collect rubbish in Castle St on the final day of the student-organised Enviroweek. Photo: Peter McIntosh
A mass clean-up of Castle St, signalling the end of the inaugural university student-organised Enviroweek, was relatively low-key compared with other rubbish collections in one of Dunedin’s "party" streets.

But Matthew Schep, co-leader with Polly Brownlee of the Students for Environmental Action group (SEA), the primary environmental activist group on the Otago University campus, was happy with the results and the response of people to the week.

During two to three hours yesterday afternoon, Castle St residents were provided with dustpans and brushes to clear broken glass, and black plastic rubbish bags for their garbage which they could take to rubbish bins for removal.

The event was quieter than expected as there had not been much in the way of student parties, Mr Schep said.

"They’ve been too busy with assignments."

The week of "creative" activities, events and talks - aimed at getting people to think about sustainable living and protecting the environment - was organised by several student groups focused on conservation, the environment and ecology.

After the Castle St clean-up, the final event of the week was the screening last night of an environmental documentary The Third Industrial Revolution.

The inaugural Enviroweek was funded by a donation from the estate of Ken Mason, a dedicated, long-term  environmentalist who died last year.

"Without that generous donation, we would not have been able to fund the week," Mr Schep  said.