Dr Anne-Marie Jackson has been honoured for research, including on drowning prevention. Photo: Peter McIntosh
University of Otago scholars Anne-Marie Jackson and Keith Gordon have received national research awards which were announced at research honours gala in Dunedin last night. 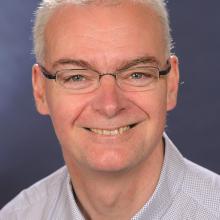 Keith Gordon
Dr Jackson, who is a senior lecturer in Maori physical education and health, said it was "awesome" to have received the 2019 Te Kopunui Maori Research Award.

The latest annual Royal Society Te Aparangi awards celebrated the achievements of New Zealand researchers by awarding a series of medals and awards.

Dr Jackson has led a team of researchers and communities to create a free Maori water safety programme to strengthen whanau connection to the water.

Water was the giver of life for Maori, but also a source of tragedy, given that Maori comprised 20% to 25% of New Zealand's drownings, despite being 15% of the population, she said.

She hoped her research would help achieve mauri ora (flourishing wellness), and dedicated her award to her late mother, Celia Parore, of Dunedin.

Prof Keith Gordon, of the chemistry department, was awarded the MacDiarmid Medal for "outstanding scientific research" and his innovative use of light to understand molecular structure in many areas involving technology, health and the environment.

Prof Gordon uses the interactions between light and matter - called spectroscopy - to probe the molecular structure in many materials, from solar cells and fish oils, to plastics in the environment.

He paid tribute to students and postdoctoral researchers he had worked with, as well as colleagues and collaborators.