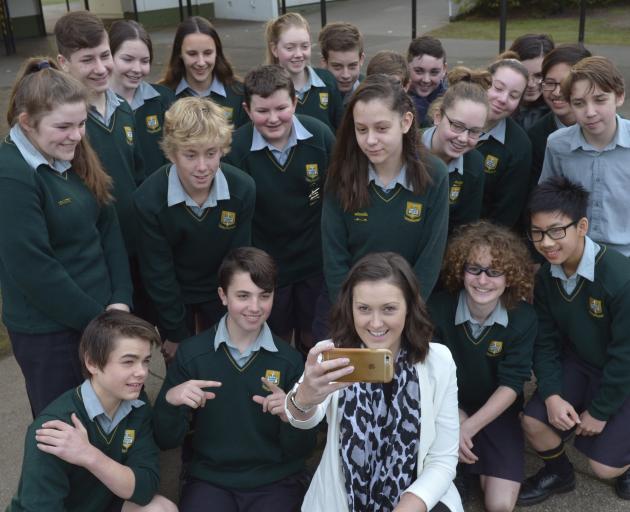 University of Otago marketing department professional practice fellow Leanne Ross takes a selfie with Bayfield High School pupils after giving a talk about social media safety. Photo: Gerard O'Brien
When a well-meaning adult tries to share wisdom about the dangers of social media, young people usually see it as a lecture from a technophobe.

But University of Otago marketing department professional practice fellow Leanne Ross is trying to change that by travelling around Dunedin secondary schools and sharing how social media has helped her get to where she is today.

"I tell them I worked in social media, I teach it now, I personally love it and I met my husband on Tinder.

"This warms them up to the fact that it isn’t a lecture from someone who hates technology, which is what teenagers are used to."

As well as using social media to meet her husband, the young Irishwoman said it had played a major part in getting her into her dream job.

"I became well known over there. I was head-hunted for jobs; I started speaking at conferences and became an independent consultant.

"Without that, I wouldn’t have had those life opportunities.

"It definitely has its pros and I’m so for social media."

So much so, she encouraged young people to use it to display their interests.

"Use the internet for you."

But she agreed there were dangers in social media, and boundaries were needed.

During her talks to junior secondary school pupils, she explains some of the dangers posed by social media — from physical ailments such as addiction and lack of sleep, through to grooming, cyberbullying, personal safety and cybercrime.

She said the reason social media had worked so well for her was because she was  careful to protect her online reputation — something many naive, risk-taking and "slightly foolish" teenagers failed to do.

Online reputation was important because universities and employers vetted students and prospective employees by searching their online activity.

She said there were many examples of "normal people" who had suffered because of mistakes they made on social media, and it could be difficult to move on from.

"I go through five key things they can do proactively to get more value from, and be safe on, social media, like creating positive content online for their digital footprint, checking their privacy settings, Google Alerts in their name, what to consider when liking and sharing content online, as well as what to do if they are in crisis."