Photo: ODT files
Cuts to academic jobs in the department of mathematics and statistics to redress financial problems were in the pipeline before the controversy surrounding marine sciences at the University of Otago, information obtained by the Otago Daily Times reveals. 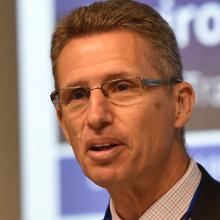 Richard Barker
Minutes from a November 6 meeting between staff and a recording of a meeting revealed department head Prof Richard Barker dropped a proposal, and job cuts were "completely off the table".

The department would reconsider how to address its financial problems without resorting to cuts next March.

Information provided by an anonymous source featured Prof Barker saying he had dropped the plan about two-and-a-half weeks before the meeting.

"We decided we would shelve it, rethink things over Christmas and into the New Year and think about ways we can address the problems."

A target of March would give the department enough time to plan a way forward, Prof Barker said.

A presentation also provided to the ODT showed the mathematics side of the department would be $826,700 in deficit at the beginning of 2020, while the statistics programme would have a small surplus of $6746.

Proposed cuts to the department of marine sciences came to public attention in October and attracted hundreds of submissions, and have since been dropped.

The presentation said the department’s financial position was deteriorating "against a backdrop of challenging university finances".

Prof Barker told staff at the meeting the university surplus of $6million for next year sounded like a lot, but was "very little" set against a target of about $22 million.

The division’s "lemon is just about squeezed dry, and they squeeze it a bit more", Prof Barker said.

A university spokeswoman had "no further comment to make on information that was recorded and then shared in what can only be described as a serious breach of trust".

The university did not respond to questions about the meeting or to inquiries about whether cuts to other academic departments had been considered this year prior to the marine sciences cuts.

A publicly-available report from the latest University of Otago council meeting showed the university has a budgeted surplus of $6.4million for next year, a reduction of $9.6million from the 2019 budget.

A graph in the presentation showed equivalent full-time student trends from 2004 to 2019. Both sides of the department started with about the same number of EFTs around the 220 to 230 mark.

However in the 15-year period statistics had increased to about 250 to 260 students, and mathematics and computational modelling had gradually dropped to fewer than 200 students.

The 2020 budget process had highlighted structural imbalances within the department, particularly that the mathematics programme needed attention, the presentation said.

"Growth in statistics has masked deterioration in mathematics," the presentation said.

"The department needs to engage in addressing these problems — we need a plan."

It concluded that the university needed to address the imbalance, refresh the mathematics programme, and to engage better at university level.