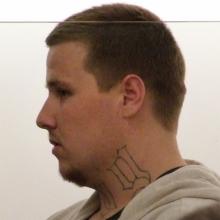 Casey Richmond.
A drug user was so incensed that he had been duped into swapping his car for 2.5g of rock salt, he went to police.

The Milton man who had sold him the clear crystals, claiming they were methamphetamine, was Casey Richmond.

He appeared in the Dunedin District Court yesterday and was jailed for two years despite the fact he essentially sold a very expensive condiment.

The 22-year-old had admitted offering to supply the class A drug.  Judge Kevin Phillips said the fact it was actually salt made no difference to his guilt.

The court heard how Richmond began texting the  drug user  on October 8, initially offering 2g for the man’s Nissan.

Over three  and a-half  hours and 54 text messages the negotiation reached the stage where the defendant was willing to give up 2.5g in exchange for the car.

But Richmond would not let the man sample the substance, which he had referred to as "rock" and "crack".

After the deal took place, the defendant left in the car when he was forbidden to drive.

Later, the disgruntled client contacted him after he had unsuccessfully tried to smoke the rock salt.

Richmond denied he had hoodwinked him, claiming it was "good stuff" he had got from a friend.

"Mayhem, street violence, unbelievable type of behaviour," was how Judge Phillips described it.

Richmond and another Milton resident were involved in "a private feud", the court heard.

On the day in question, the defendant parked outside his rival’s home and accelerated, causing  the vehicle’s wheels to spin for 30 seconds.

He sped off but the man, carrying a metal pipe, tracked him down to a local pub.He chased Richmond, who sought refuge in a nearby bottle store.

"One would’ve thought that was enough but it wasn’t for you," Judge Phillips said.

Richmond again drove past the man’s house in a provocative manner, which led to a showdown at the defendant’s home.

Both men, armed with metal bars, were preparing to fight and threats were issued but they did not come to blows.

The incident led to charges of possessing a weapon, driving while forbidden and driving with a sustained loss of traction.

Richmond was on bail when the shonky meth deal went down 10 months later.

"One would’ve thought you would have kept your head right down and ensure you didn’t create any problems," the judge said.

She said he had previous convictions for dishonesty but none for drug offending, and she stressed he was not a user.

"He does need to undertake some rehabilitation because he doesn’t want to be returning to prison as a result of his bad decisions," she said.

Judge Phillips said Richmond had been classed as being at high risk of reoffending.