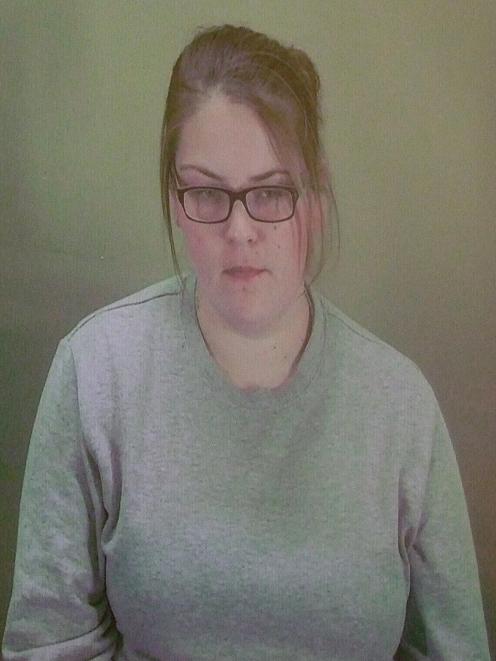 Alana Cairns (25) was jailed for three years when she appeared in court via video link from Christchurch Women's Prison.PHOTO: ROB KIDD
A Dunedin mother of three who assisted in the armed robbery of a hotel will care for two children behind bars, a court has heard.

Alana Hayley Cairns (25) was jailed for three years when she appeared in the Dunedin District Court this week after pleading guilty as a party to the December 22 aggravated robbery of the Law Courts Hotel.

Counsel Brian Kilkelly told the court his client was currently in prison with her 9-month-old and was expecting her fourth child in January.

Children are allowed to stay in the "Mothers With Babies Unit" until the age of 2. Of the eight mothers incarcerated, only Cairns would have two children.

Her partner, Joshua Karl Smith (29), and his mother, Joanne Francis Smith (47), will be sentenced in the Christchurch District Court tomorrow.

As well as the incident at the Stuart St, Dunedin, venue, the duo also admitted the armed robbery of The Fitz sports bar five months earlier.

Cairns' involvement was driven by fear, Mr Kilkelly said, of her overbearing boyfriend, who had previous convictions for assaulting her.

"This was a woman who had been subject to a difficult, violent relationship from which she had not extricated herself," he said.

"She is now facing up to the consequences of that."

The specifics of the Law Courts Hotel heist can now be revealed for the first time.

Cairns had been instructed to play the pokies while reporting back to the Smiths about how many staff were present. Later the plan changed.

Cairns booked a room at their request, so she could obtain the PIN code to the external door for after-hours access.

Shortly before midnight Mr and Mrs Smith arrived; both in dark hoodies, both masked.

They did not need Cairns' help - the door was open.

While the lone staff member worked in the gaming lounge, the mother and son hid under a table in the restaurant awaiting her return. As she walked into the office, they followed.

Mr Smith flashed a knife near her throat and instructed her to empty the cash from the safe into the backpack his mother held.

They prepared for their escape with more than $16,700 and told the victim to go to the toilets and count to 100 before she came out.

She did, but Mr and Mrs Smith were still in the premises and they sent her back with instructions to count to 1000.

Cairns left the hotel about 5am that day, but Mr Kilkelly said it was not to evade detection.

She wanted to be home when her children woke up.

"Ironic", the lawyer said, that she would now be away from two of them for so long.

While Mrs Smith was heading back to Christchurch, police stopped Cairns and her partner as they drove down Hillside Rd.

They found the backpack used hours earlier with only $4084 inside. The rest of the money had not been recovered, the court heard.

Judge Kevin Phillips said the victim of the robbery feared working on her own and was now less trusting of people.

"It had a major psychological impact on her and continues to do so," he said.

Cairns had no previous convictions.