A Dunedin horse breeder and trainer may be banned from racecourses after a long-running family feud ended in a punch-up. 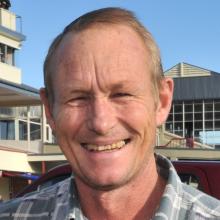 Trevor Sillick
Trevor Ian Sillick (64) appeared in the Dunedin District Court yesterday, applying for a discharge without conviction after he was found guilty of assault with intent to injure following a judge-alone trial.

The pest-control operator, who has been involved in the racing industry for several years, said a conviction would mean the Racing Integrity Board could bar him from being trackside.

But Judge David Robinson said Sillick would have a good case for an exemption being granted.

He declined the application, convicted the defendant and sentenced him to 120 hours’ community work.

The court heard there had been friction within the family for years and tensions rose again following a group holiday to Queenstown last year.

On July 4 last year, the victim went to Sillick’s home.

While Judge David Robinson took that issue into account, he stressed the defendant was the aggressor in what followed.

CCTV footage showed Sillick advance on the other man, "at pace", and push him back.

"My overall impression was that you were spoiling for a fight," the judge said.

The victim aimed a pre-emptive punch, which missed, but the one Sillick threw in return landed. While the man was on the ground, the defendant hit him again in the head.

Judge Robinson said Sillick’s comments to police in a subsequent interview were telling.

"Somebody needed to sort him. I’m the head of the family and it had to be done ... It was going to happen one way or another," Sillick said.

He called the victim "a very ungrateful bugger".

The judge said even in an affidavit recently written by the defendant, he continued to justify his violent outburst.

"I struggle to find real evidence of remorse," he said.

"This was about you putting the victim in his place."

Counsel Len Andersen QC said that irrespective of a conviction, his client had still been severely punished.

He had had to give up a lucrative contract at the university and was now looking at giving up his business (if it could not be sold) and leaving Dunedin.

"He acknowledges he’s let himself and his family down and tarnished his reputation," Mr Andersen said.

The judge accepted there would be a significant "loss of face" for Sillick, who provided multiple references showing how highly he was regarded in the community.

The court heard the defendant had previous convictions but they were historical and minor in nature.

Judge Robinson ordered Sillick to pay his victim $1500 for the emotional harm caused.

He was innocent, but the police would not listen