Cycle lane plans may include other parking 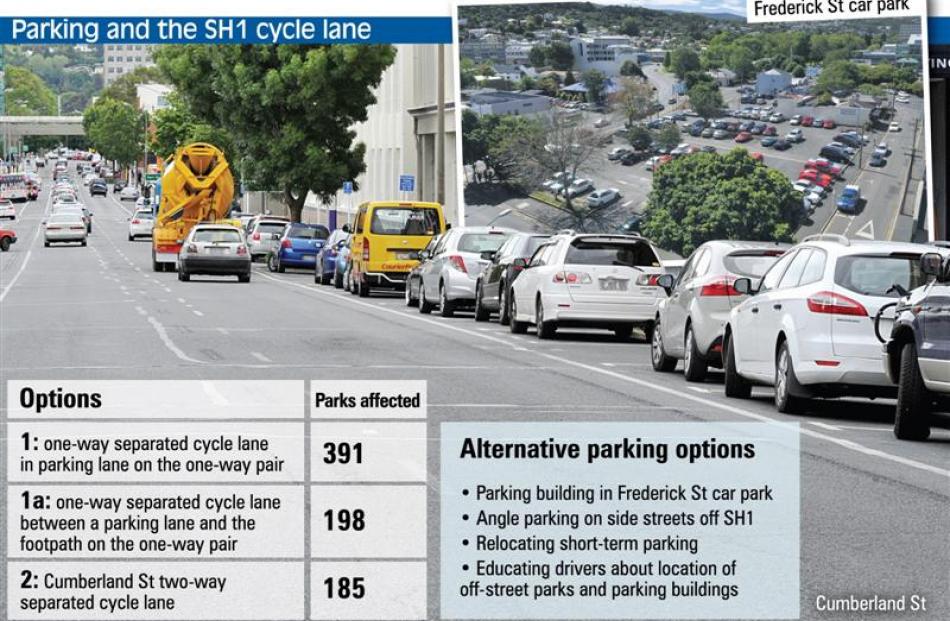 There could be more car parks around State Highway 1 in central Dunedin after a cycle lane is built on it, if city council plans come to fruition.

Between 185 and 391 car parks could be removed from the SH1 streets under three cycle-lane options being worked up over the next five months into a business case for the New Zealand Transport Agency and the Dunedin City Council to consider.

At the same time, the council is working on a plan for providing alternative parking spaces in the area should the ultimate decision be to continue with one of the cycle lanes.

Council transportation planning manager Sarah Connolly said staff were investigating various options, but if the council put angle parking in side streets off the state highway and a parking building was built on the Frederick St car park site, there would be a net increase in parking available.

The NZTA and the council will consider the business case in March and decide whether to proceed and, if so, with which option.

They would also choose a parking plan at that stage, Ms Connelly said.

The finer details of the plan would be bolted down after that, hopefully by June.

The aim of the parking plan was to minimise the number of parks lost in the area due to any cycle lane going in, and to work out a way to provide parking alternatives for organisations along the route, such as businesses, Dunedin Hospital, Otago Museum and the University of Otago.

Options being investigated included angle parking on side streets, possibly up to several blocks from SH1; relocating short-term parking; reinstating some of the parks removed in recent changes to improve safety on the highway following the death of a cyclist near Dunedin Hospital; providing information about parking availability in off-street car parks and buildings; and a parking building at the Frederick St car park.

Previous material distributed to councillors suggested a four-storey mixed-use building could be built on that site, with 228 parking spaces.

Council property manager Kevin Taylor said discussions were taking place within the council and with third parties about the pressing need for a parking building in the area, especially if a cycle lane led to parking losses.

Given other proposed developments by organisations in the general area, especially the university, it was an appropriate time to prepare a comprehensive development plan for the Frederick St site.

An ''issues and options'' report to the council would be the first step and there was no specific date set for that at this stage, he said.

Ms Connolly said staff would draw up all parking options and seek feedback during community consultation on the preferred cycleway design, expected to take place early next year.

Consultation results would be incorporated into a recommendation to councillors who would decide which elements would be implemented.