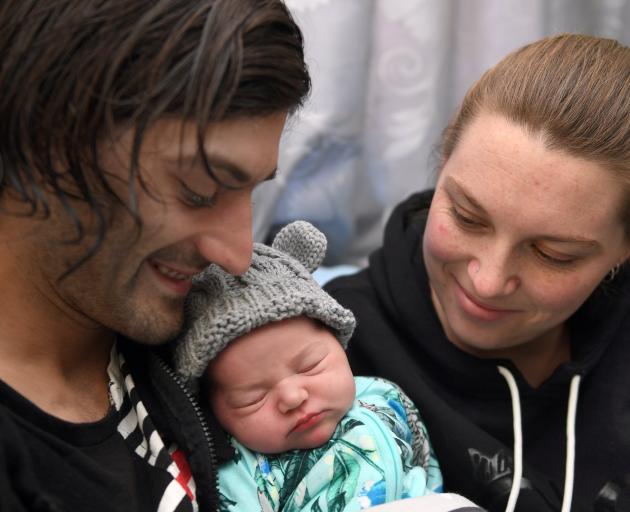 Enjoying a quiet moment with their newborn baby daughter, delivered with the help of St John Christchurch call-taker Olivia Steers yesterday, are Dunedin couple Dylan Henderson (26) and Yasmin Taylor (25). PHOTO: STEPHEN JAQUIERY
A Dunedin dad has heaped praise on a St John call-taker for keeping him calm while he helped his wife deliver their happy and healthy daughter yesterday morning.

St John call-taker Olivia Steers spoke highly of the parents' cool and calm response, saying it was a privilege to help the bonny baby into the world over the phone from Christchurch.

Shortly after dawn yesterday, Musselburgh painter Dylan Henderson was preparing to take his partner, Yasmin Taylor, and 3-year-old son to hospital for a routine birth.

He called his boss, then told the family it was time to hop in the car, but his soon-to-be-born daughter had other ideas.

"The waters broke and away we went.

"So I rang the midwife and said nope, don't worry about going to the hospital, you might be best to come here."

The midwife told him to call 111 and he was soon connected to Ms Steers, who, he said, was cool and calm as she told the parents how to proceed. 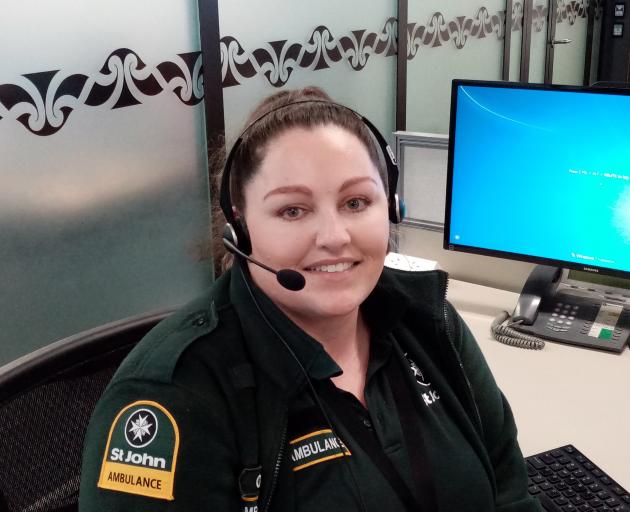 Sitting at the desk where she helped deliver a Dunedin baby over the phone yesterday is St John call-taker Olivia Steers, of Christchurch. Photo: Supplied
Things began to move quickly.

"Next thing you know the head's out, the whole body comes out and I'm birthing my daughter.

"Everything went so smoothly and my partner was so good. I was pretty much a mess but I had Olivia talking to me telling me what to do with the baby.

"I put her on to my partner's chest and she just talked me through getting all the towels, wrapping her up and keeping them warm.

"I'm never going to do that on my own again."

Ambulance officers and a midwife arrived shortly after and found the baby girl was happy and healthy and everything had gone as it should.

Ms Taylor yesterday joined her partner in praising St John as well as their midwives.

"I would just like to thank the call centre and their advice.

"And a special thanks to my midwives for everything and being there on call ... and all the amazing work they do."

Speaking from her Christchurch office near the end of her shift yesterday, Ms Steers said the couple had done well.

"He was really good at carrying out the instructions ... and just helping look after the mum and the newborn until the ambulance arrived."

In three years as an emergency response call-taker she had helped about four mothers give birth.

"Usually, we assist people in their worst moments and we don't know the outcome, so it's a nice change to assist in a nice moment, helping them bring a newborn into their family."

It is these little things in life, of a society showing and giving care that mostly exist under the radar, that actually are so foundational to society. Marvellous, thanks to all.