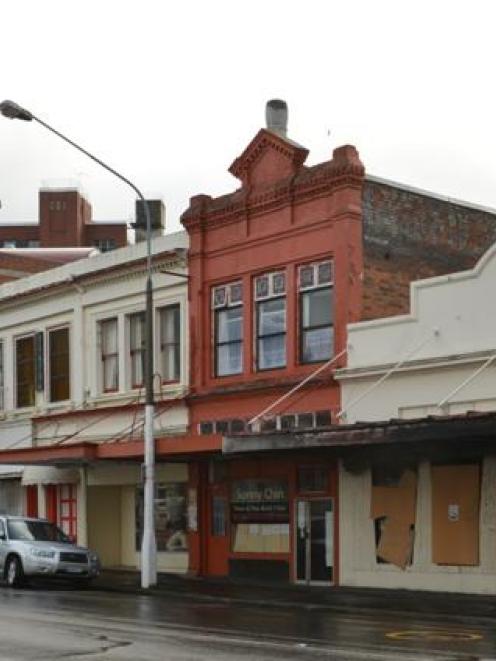 Older buildings, including the empty former Furniture Court building (left) and the empty former Tai Ping restaurant building (right). Photos by Peter McIntosh.
The Dunedin City Council is planning to target the owners of dilapidated heritage buildings in the city to stop ''demolition by neglect'' and encourage ''unco-operative'' owners to fix up their properties.

It says it has put ''substantial effort'' into encouraging the re-use of heritage buildings, using ''carrots rather than sticks'', but it is now searching for ways to take a more active approach in using powers it has.

It will next week consider its options for dealing with such building owners, from better using the Building Act in relation to insanitary buildings, to creating a register, or, at the most extreme, imposing financial penalties.

The Otago Chamber of Commerce says the proposal is something it will ''follow with interest'', as owners are often dealing with the economic reality of buildings that lose money.

A report by acting urban design team leader Glen Hazelton to Tuesday's planning and regulatory committee meeting said preserving the city's architectural inheritance and character was a key part of the city's goal of being one of the best small cities in the world.

The council had put plenty of work into helping owners.

''However, not all owners are so positively predisposed or respond positively to incentivisation.''

Dr Hazelton said in the report it was sometimes argued demolishing undermaintained buildings and replacing them with open-air car parks had positive effects for amenity and parking.

But over the long term those spaces did not look good or encourage economic activity.

Of the heritage buildings granted consent for demolition since 2009 - the Garrison Hall in Port Chalmers, the Brocklebanks building in South Dunedin, 372-398 Princes St, the Butterworth building, Bank of Australasia, the Barrons Building, the N. and E. S. Patterson Building, and the Dainty Dairy - only Brocklebanks had been replaced by a new building.

The Rattray St and Princes St buildings clearly showed ''the results of insufficient maintenance and the cycle of decline''.

''Although the area is within a townscape precinct, the existing protections and management of heritage buildings have proved insufficient to halt or reverse the decline.''

Dr Hazelton's report raised the possibility of financial penalties for building owners neglecting properties, but said there were disadvantages.

Instead, it suggested developing a register of at-risk heritage buildings to provide an inventory of sites, and track them annually.

As well, legal advice showed there might be potential for a stronger approach to Building Act provisions relating to insanitary buildings.

Those could be used for ''a more proactive approach'', and ''potentially a notice requiring work''.

Yesterday, he said he expected ''a lively debate'' on the issue on Tuesday.

Dr Hazelton said a register was something the council would put together.

Building owners' names would not be included, though the information was available on the council's rating database.

Instead, it would highlight the buildings that needed work done, and possibly lead to positive moves to fix them up.

Chamber of Commerce chief executive John Christie said along with legislation on earthquake-proofing, any new rules could force owners to walk away from their buildings with no economic return.

''That's where we get demolition by neglect.''

Mr Christie said the city needed to find a way to grow the economy so buildings would be re-used.

However, there was ''no magic wand'' to make that happen.

Lion spokeswoman Judy Walter said Lion owned the former Furniture Court building next to the Speight's Brewery in Rattray St and had no plans to redevelop it.

Lion had not been contacted by the council about the building and would not comment until it had, she said.

Property owner Lincoln Darling said the council could issue fines up to $200,000 for non-compliance but it was often difficult to legislate, especially when there were ''economic issues involved and a raft of different landlords''.