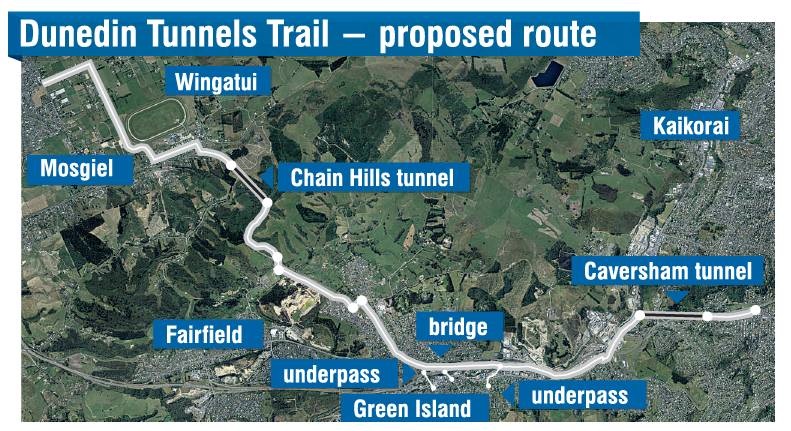 Almost the entire wish list of the Dunedin Tunnel Trails Trust has made it into the plan for a cycle trail between Mosgiel and Dunedin; now the trust want the council to get on its bike and get the thing built.

The Dunedin City Council has published its preferred route for the long-gestating cycle trail, which links the east of Mosgiel with Caversham.

The route takes in two former rail tunnels, plotting a course through both the Chain Hills tunnel and the Caversham tunnel.

It also features a pair of underpasses and a bridge to provide safe links with Green Island across the Southern Motorway.

Dunedin Tunnel Trails Trust chairman Gerard Hyland said the trail looked like it was going to have some great features.

"The only thing that hasn’t come to fruition from my viewpoint, or from the trust’s viewpoint, is the whole trail in terms of timing."

He said the trust had been battling to get the project off the ground for close to 15 years, and it was a good feeling to see some "real progress" in terms of a preferred route.

He expected a discussion paper to be presented to the council early in the new year, to be followed by a full business case for the proposal.

"We just have to get people to let the councillors know that this is a priority for everyone."

With an eye to the future, Mr Hyland said the proposed trail would have the potential to add a branch to Fairfield and even as far as Brighton after the initial trail is completed.

"So you’ve got all these suburbs now becoming connected via active transport for people to walk, for kids to bike and to walk, it’s going to be really, really good."

This is a fantastic project that will be a well used asset. Great to be making the most of existing tunnels, otherwise locked up and wasted. Finally a project worth the council's time and money!