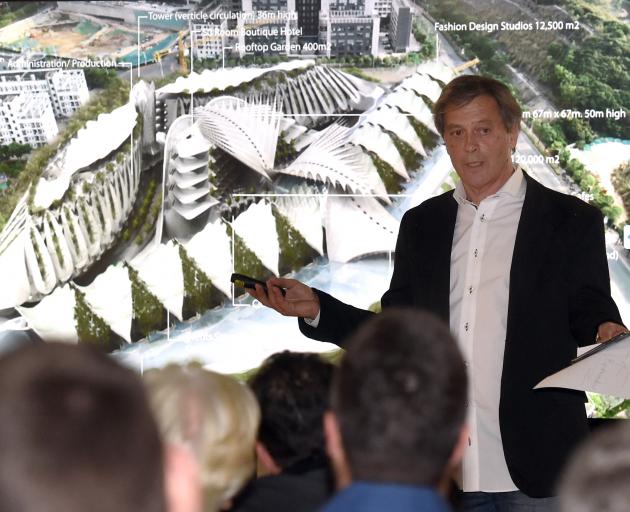 Business leader and innovator Ian Taylor reflects on the design of a huge new building for a fashion company, designed in Dunedin and being built in Shenzhen, China. Photo: Peter McIntosh
Once we understand the ''why'', the ''how'' should look after itself, in Dunedin's future as a smart city, award-winning business leader Ian Taylor says.

The three men gave talks about, and also took part in a panel discussion on ''Shaping Dunedin's Future with Smart City Technologies''.

Addressing about 100 people, the three speakers considered how new and emerging technologies could be ''best utilised in the Dunedin Hospital Rebuild and the proposed Dunedin Harbourside Vision''.

Dunedin was well placed to incorporate smart city principles in the future and he paid tribute to the skills of the city's designers, including Damien van Brandenburg, of Architecture Van Brandenburg, and the huge building the firm had designed for the Marisfrolg fashion label in Shenzhen, in southern China.

The hospital redevelopment could also help to usher in a range of other related positive changes, including the proposed development of an Interprofessional Learning Centre, likely to be located to the north of the new hospital campus, he said.

Having a shared health treatment simulation centre there would mean more collaborative health teams for the future after a range of health professionals, including doctors and dentists, had trained more closely together.

Extending the existing district heating scheme would bring further lower carbon benefits, and the labour demands for the new project could also open up some important new opportunities for Dunedin and Otago people of many ages, he said.

Oh so sorry to miss this. Do hope there is a repeat.