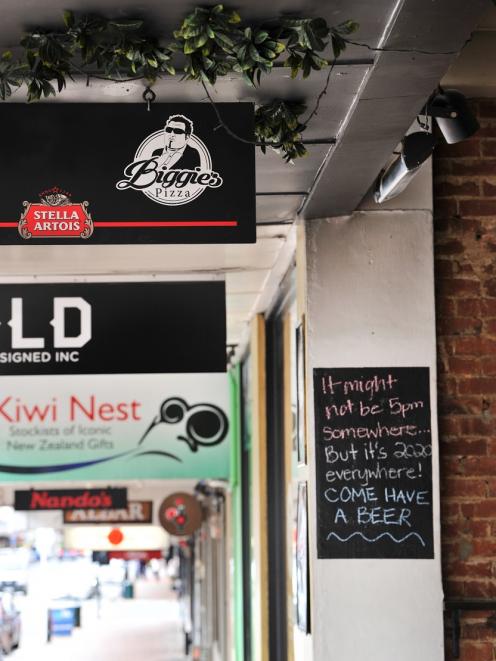 Biggie's Pizza is in Stuart St in Dunedin. Photo: Christine O'Connnor
A Dunedin pizza restaurant is being bombarded with "fake reviews" and negative comments after turning away an Auckland couple over Covid fears.

A couple on a South Island road trip say they weren't allowed inside Biggie's Pizza for a drink once they revealed they came from Auckland, despite having left the northern region more than two weeks ago.

The disgruntled would-be diner and her partner were left shocked and angry by the blanket refusal, saying they had no links to any Covid cases and did not pose a health risk.

But the Stuart St eatery, which is battling for survival, is making no apologies for its hardline stance banning the patrons, saying it has the right to turn away customers to protect staff and the business.

Restaurant owner Tacey Millard told the Otago Daily Times there was no blanket ban on people from Auckland.

Staff would ask patrons questions about things like their recent travel history and symptoms. Depending on their answers, and their attitude, a decision would be made about whether to let them into the premises, she said.

The couple in question were unhappy about being asked questions, and the restaurant manager decided not to let them dine there.

Since news of the issue broke, the restaurant had been receiving fake reviews and negative comments online, she said.

As long as businesses did not discriminate against people for reasons such as race or age, they could choose who they allowed on their premises, she said.

During the current alert level 2 it was a matter of taking ‘‘extreme precautions’’ in case a person with links to Auckland, where community transmission was ongoing, should bring Covid into their premises.

The 27-year-old woman, who had been in the South Island since the start of the month, said she was stunned when staff quizzed her about recent travel.

Questions included whether the couple had been to Auckland.

‘‘We said yes. They asked us when was the last time we had been there and we told them September 1.’’

At that point they were refused entry.

The couple had been touring across the mainland for more than a fortnight, supporting local businesses after recent travel restrictions were relaxed.

They had not been unwell during their southern holiday.

The pair also had no connection to Covid cases.

The woman, who did not want to be identified, said they couldn't believe they were being subject to this level of discrimination.

‘‘We have been road tripping around the South Island, trying to support local businesses and they have all been very welcoming aside from this bar. We were so shocked and angry that we were treated this way and it's not good enough," she said.

But restaurant owner Tacey Millard today said the ban was about protecting people in the midst of a pandemic.

‘‘We are taking extreme precautions and have the right to turn people away from the business in these situations," replied Millard on Facebook to the disgruntled Aucklander.

‘‘If you were in fact to have the virus, it could put us out of business entirely which is detrimental for a small business like ours.’’

Thanks for the heads up! Will be sure to tell everyone to avoid this place. I thought hospitality places were struggling, and wanted more domestic tourism? I hope they are not asking for a tax payer subsidy, while simultaneously banning a huge number of taxpayers? Oh well. I guess they want no customers... wish granted!

Because you say so? Socialists don't understand business, never will. If is your habit to blag local business, take the next stage. Out of town.

Which socialist? The heart of Capitalism is that if there is no demand for a product, the business will go bust. Socialism would be the State supporting them after they make a delibetate decision to drive customers away.

Thank you very much mate; its a great place and we don't really need people like you patronizing it. Please feel free to tell everybody you know, plenty of other places around Dunedin that would be happy to listen to the winging!

Sounds like the place made the right call. Must go there soon.

The business owner specifically stated there was no blanket ban on anyone from any region. More likely the patrons had a similar attitude to you - so the owner probably made the right call.

"If you were in fact to have the virus, it could put us out of business entirely which is detrimental for a small business like ours." Actually it's detrimental to any business.

Auckland has been in lockdown since August with travel restrictions both in and out of the city in place during that period. How did this couple leave the city in order to go touring the country? What excuse was given by the couple in order for them to traverse the road blocks?

Good on the restaurant for reducing the risk to their other patrons from tourists who clearly don't think the lockdown restrictions apply to them.

Must be trying to get profits down in hope of more government subsidies.
Appalling behaviour, this is one business I hope crashes and burns.
Hoist on ones own petard....

Yet another example of the self-entitled who place their "rights" over the welfare of a community and then whinge to the media when things don't go the way they wanted them to go. Thumbs up to the restaurant for not bowing down to this selfish couple. How did they get out of Auckland anyway?.

Why don't these Aucklanders who have escaped the lockdown identify themselves? Surely they have the courage of their convictions? Or have they broken the law?
The police need to find these people and work out how they got across Cook Strait.
The problem is not the Pizza Place, the problem is the escapees who are arrogantly threatening the health and economy of the South Island.

Every business has the right to refuse service to anybody. I applaud them for having the conviction to stand up for what they believe in. I plan on bringing my family in for a big feed over the weekend.

Unpleasant customers are bad for business and not nice to dine with. Good on the manager for calling them out. May your business prosper.

They did the right thing to protect their employees and the community.

Seems to me, the patrons took offence to being questioned about there travel history. During a pandemic, it seems quite reasonable that a small, privately owned eatery should ask such questions. I've a sense it was the attitude of the patrons that probably rubbed the owner up the wrong way, as the owner has stated that there is no blanket ban on people from the Auckland region. Business owners are nervous, understandably. I'll be sure to pop in for a pizza next week. Good luck.

Bravo Biggies. Always a great place to dine and we look forward to going back soon especially knowing customers safety and health are top priority. I am also curious as to how the pair got out of Auckland during lockdown and have clearly broken the rules hence remaining anonymous.