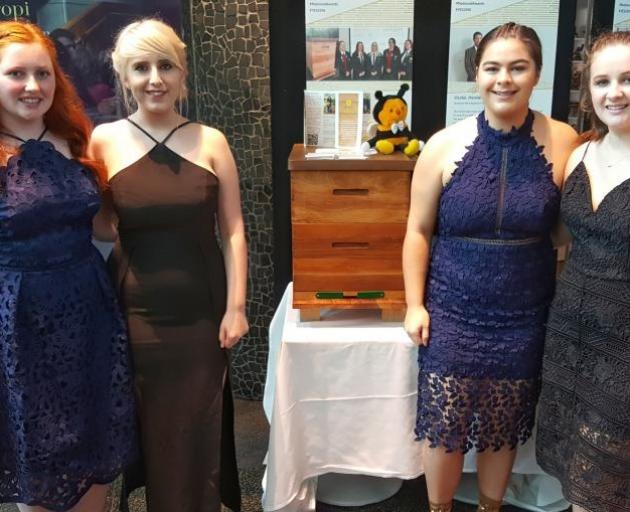 Like bees to honey, hobby apiarists around the country swarmed to the new beehive manufacturer, and  Kaika BeeCo sold more than 150 hives which were handmade by the girls in the school’s wood technology facility.

Nadia (17), the company’s managing director, said word got out, creating a buzz among apiarists, and the girls had to spend hours building the hives after school, just to keep up with the demand.

The beehives were made mainly from pine, but some were also made from rimu which had been recycled from old school buildings and furniture.

The Honey Huts sold for between $100 and $130 each, and the money made would go towards their tertiary studies next year, she said.

At the Lion Foundation Young Enterprise Scheme national final in Wellington on Tuesday night, Nadia won the top New Zealand scholar award for gaining the top mark in the Young Enterprise exam, and the team won the Ministry of Business, Innovation and Employment Award for its operations.

Kaikorai Valley College teacher in charge of the Young Enterprise Scheme Peter Dodds said there were 24 regional winners, but only seven teams won national awards in the final.

"The calibre of the competition this year was extreme."

Many of the judges congratulated the team and said how impressed they were with their business project, he said.

They were one of four winning teams selected to attend a meet and greet with Governor-General Dame Patsy Reddy.

He said the school was going from strength to strength in the competition, after winning the Unitec Award for Enterprising Technology, and the Xero Award for Thinking Big in last year’s national final.

Mr Dodds said the school was already investigating next year’s project for the Young Enterprise Scheme.

As for details about what that might be, he was tight-lipped.