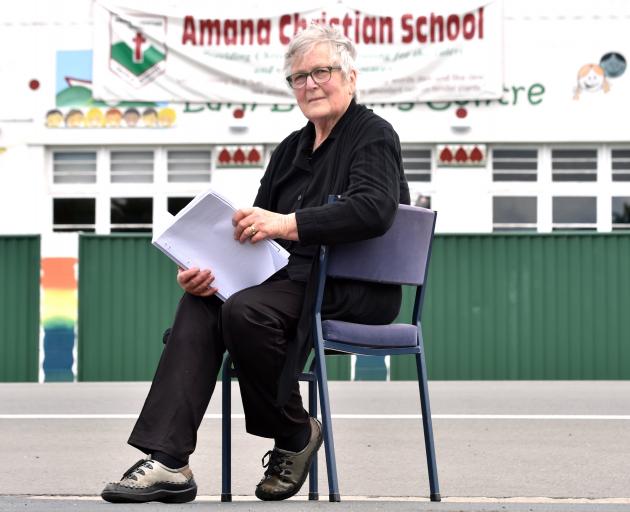 Sitting across the road from her school yesterday is Amana Christian School principal Roslyn King, who is unable to enter the grounds as she is unvaccinated. PHOTO: PETER MCINTOSH
The unvaccinated principal of a Mosgiel school which has lost half its staff because of the vaccine mandate says it is one of the darkest times in New Zealand education history.

Two of the four staff at Amana Christian School, which has 14 pupils, cannot have contact with pupils because they have not been vaccinated against Covid-19.

One of the unvaccinated staff is principal Roslyn King, who has concerns about side effects.

However, University of Otago immunologist Associate Prof Jo Kirman said while she could understand the concern, the vaccines had a ‘‘really good’’ safety profile and Medsafe had been very transparent about any adverse effects.

From yesterday, education staff needed to have at least one dose of the vaccine to be able to enter school grounds and have contact with children.

Mrs King said yesterday was a dark day in the history of education in New Zealand and the school was facing the ‘‘grim’’ consequences of the mandate.

She was unvaccinated and had to work from her office off the grounds, along with one other staff member, she said.

Although she did not speak for the school, its governing body was ‘‘totally against’’ the mandate.

Mrs King said she had medical concerns about both the Pfizer and AstraZeneca vaccines and did not believe the side effects were worth it.

She had applied for a medical exemption.

If other ‘‘more developed’’ vaccines were made available she would be happy to be vaccinated, she said.

Yesterday was also a sad day for children, as they would lose access to ‘‘a huge, irreplaceable resource of highly trained and dedicated people’’.

The school was developing ways to work around the issue, including a distance-learning programme.

She understood misinformation was an issue, but if even a small portion of the information she had read online was correct then there was ‘‘serious cause for concern’’, she said.

Prof Kirman said although the technology used in the Pfizer and AstraZeneca vaccines was new for vaccines it had been in clinical trials for more than a decade and had a good track record.

Information about vaccines did not just come from one place and Medsafe had approved the vaccines for use independently of the Government and other health bodies.

There was some good information available online, but it was surrounded by so much misinformation that it was difficult for most people to know which was which, Prof Kirman said.

Anyone concerned about the vaccine should speak to a trusted doctor, she said.

The Government is using mandates as a tool to reach the 90% vaccination target, which it says will give New Zealand’s health services a better chance of coping with the predicted wave of Covid-19 infections.

The mandates target people who are in public-facing roles or other roles where they can spread the disease to large or vulnerable groups, such as in schools and health settings.

The Ministry of Health said education was a key public service sector which worked with a population that was unable to be vaccinated.

Twenty percent were opposed and 6% did not know.

How does it work?
The Covid-19 vaccine stimulates your body’s immune system to produce antibodies and other proteins that will fight the virus if you are exposed to it. This reduces the risk of getting infected and if you do get Covid-19, it means you could have no symptoms or will have much fewer, milder symptoms and recover faster.
— Ministry of Health