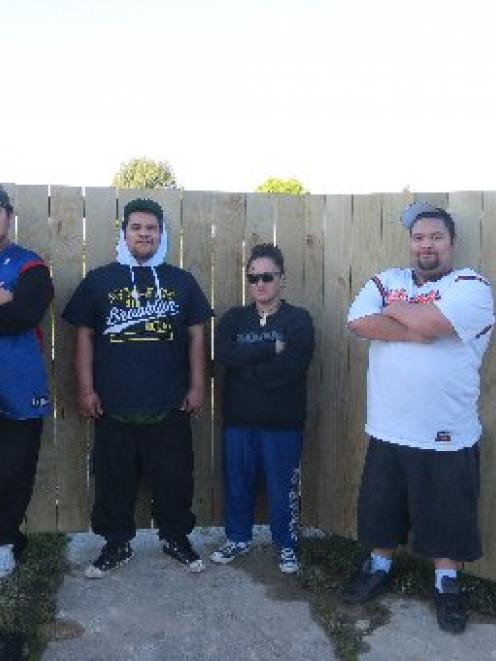 Corstorphine Community Hub users (from left) Sharn Wilson, Beau Pene, Ashlee Wilson and James Wilson are annoyed this fence has blocked their access to the hub. Photo by Jonathan Chilton-Towle.
It may not be possible to see the Great Wall of Corstorphine from space but locals want it gone, or at least gated, all the same.

Since the wall, which runs between the community facilities in Lockerbie St and the old Corstorphine School, appeared during the Easter holidays, it has caused consternation in the community.

The wall does not prevent people from going on to school grounds and can be bypassed relatively easily, causing some locals to question its purpose.

Members of the community were unclear on whose authority the wall had been built but suspected it was related to the impending sale of the property to an unknown property developer.

Local Lynley Hood, who coined the name ''Great Wall of Corstorphine'', said people had been using the paved paths that ran through the school for at least 64 years but now the way was blocked.

''Over Easter, when there was no-one around to witness the atrocity, someone, presumably the developer, built a solid wooden 2m high wall around the community facilities on Lockerbie St, and in doing so tore into the fragile social fabric of this suburb,'' she said in a letter to the media.

Members of the Corstorphine Community Hub Whanau Playgroup were also less than impressed by the wall and said it had become a ''hot point'' for the community.

Many members did not have access to cars and the wall inconvenienced them in their walks to the hub.

The fence had cut off access to the school field where hub groups played games and kept active.

Most residents indicated they would be happy with a gate so they could use the paths again.

Community Hub co-ordinator Dave McKay was starting up a community garden at the centre.

The fence had blocked the driveway he used to bring soil and compost to the garden.

Resident Harold Browett said he found the whole thing ''horrifying and quite weird''.

When he had heard the school was going to be sold he had attempted to find out if the paths would stay open by approaching local MPs and the Dunedin City Council.

The DCC had assured him they would enter negotiations with any new owner about keeping the paths open but this had not happened, he said. Mr Browett felt let down by the DCC.

Alan McMillan, of Public Access New Zealand, said he had presented a potential solution to the wall dilemma to the DCC but he did not wish to make any comment until the DCC had had a chance to respond.

Attempts by The Star to find out who had put up the wall and why were referred to Land Information New Zealand (Linz). Linz did not respond to The Star's queries by press time.

Based on previous comments made by Linz, Corstorphine School was still owned by the Ministry of Education but was subject to an unconditional offer to purchase to be completed on May 16.

Linz would not say who the new owner would be, but several sources connected to the site believed the former school was being bought by a property developer and would probably be turned into housing.

DCC infrastructure and networks general manager Tony Avery said the DCC was not aware who put up the fence but understood it was not the developer.