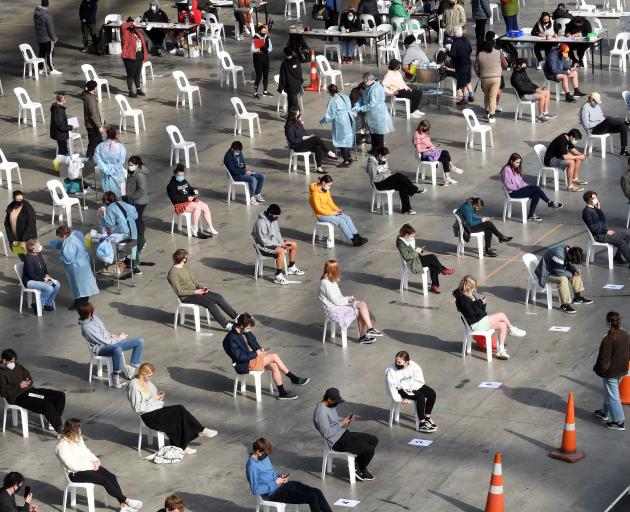 Vaccine recipients wait in rows for the all-clear to go home after receiving their jabs at walk-in clinic at Forsyth Barr Stadium in September. PHOTOS: STEPHEN JAQUIERY
Dunedin is still leading the way on Covid-19 vaccinations.

However, Auckland is only just clinging to its fifth place, with Hamilton close behind.

The latest data from the Ministry of Health shows, as of this morning, 72.2 per cent of eligible people in Dunedin were fully vaccinated compared to 69 per cent on Wednesday.

Hamilton City has climbed a place since Wednesday and now sits just behind Auckland on 66 per cent.

The city and its surrounds were forced into a snap level 3 lockdown on October 3 after positive cases were detected there. Since then, the area's vaccination rate had risen sharply, according to public health officials.

It's the latest update in the New Zealand Herald Top Towns initiative as part of its vaccination campaign - The 90% Project - which aims to get 90 per cent of eligible Kiwis fully vaccinated by Christmas.

At the beginning of the Top Towns initiative two weeks ago, The City of Sails was sitting in 19th place with just 47 per cent of the eligible population fully vaccinated.

The only newcomer to the top 10 is South Wairarapa, which scraped its way into 10th place with 64.5 per cent of its eligible population vaccinated.

The biggest mover, however, is Hurunui, which climbed 17 places to join Horowhenua at 33rd equal.

The district, located 30 minutes north of Christchurch, now has 57.9 per cent of its eligible population fully vaccinated while another 22.6 per cent have had their first dose.

The latest data comes a day before Super Saturday which the Government hopes will bolster vaccination rates around the country.