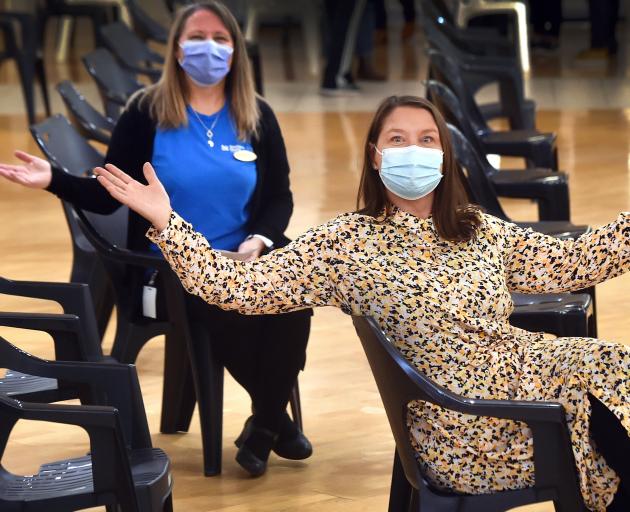 Meridian Mall vaccination centre site manager Leanne Brayshaw (left) and Southern District Health Board operations and quality project co-ordinator Romilly Smith celebrate the centre’s closure, after more than 786,000 jabs. PHOTO: PETER MCINTOSH
There has been a whole lot of pain at the Meridian Mall vaccination centre, but also a whole lot of gain.

Yesterday more than a year of sudden jabs and aching arms came to an end, after Dunedin’s main vaccination centre closed.

At its peak, staff at the Meridian were administering more than 1000 Covid-19 injections a day, but high vaccination rates in Dunedin mean a clinic of its size is now surplus to requirements.

Site manager Leanne Brayshaw, who ran the centre for most of its 14 months, said what had driven her team was the feeling that they were playing a vital part in the pandemic response.

"The workforce jumped right in and did whatever was needed.

"They had to work all different hours, but it felt like we were doing something amazing."

The southern region has one of the highest vaccination rates outside of the main centres and regularly lead the charts in vaccinations delivered despite being hampered by short supplies of vaccine early in the campaign.

As well as vaccinating at the mall, staff from Meridian ran outreach clinics throughout Dunedin, and also ventured as far away as the West Coast and Stewart Island to help vaccination efforts there.

SDHB general manager Hamish Brown, who co-managed the southern Covid-19 vaccine roll-out, recalled that no-one knew how to set up a mass vaccination centre, and staff had spent several days planning the enterprise before deciding it could be made a reality in the former Arthur Barnett department store.

"I am extremely proud of what has been achieved here and absolutely thankful for all the hard work that the team put in to it. They have done a phenomenal job during amazing times," Mr Brown said.

"It grew from strength to strength, and the people here made that happen."

About 160 staff had worked at the vaccination centre, many of whom returned yesterday after the shutter rolled down for the final time at noon, to reminisce and celebrate their achievements.

Covid-19 and other injections will remain available at all southern vaccination centres, including the SDHB’s new Dunedin Immunisation Centre-Te Puna Araimate ki Otepoti, which opens at the corner of Hanover and Cumberland Sts, (the old VTNZ building) on Monday morning.

Covid-19 Response Minister Chris Hipkins yesterday announced that, following a recommendation by the Ministry of Health, a second booster injection for the most vulnerable had been approved.

Eligibility for the shot had not been determined, but it was likely to be older people, aged care facility and disability care facility residents, and severely immunocompromised people, groups totalling several hundred thousand people.