'I was lucky I didn't get my face ripped off' 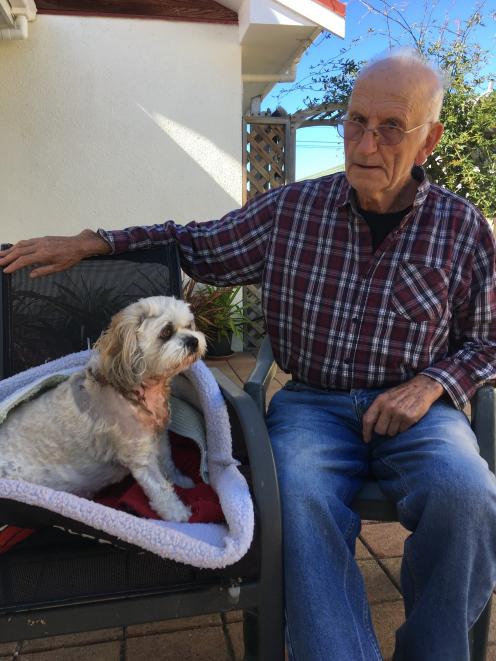 Jack Holland (84) at home with Riley, who is recovering after being attacked by two dogs last week. PHOTO: SHAWN MCAVINUE

A Dunedin pensioner wants the "beasts'' which maimed his dog to be put down.

Jack Holland, of Ocean View, was walking his shih-tzu-cross dog Riley on a leash in Brighton Rd, about 6pm last Thursday, when two "big'' dogs ran from a property.

The rushing dogs knocked him "down flat'' and during the fall, he hit his artificial hip and head on the concrete footpath.

As he lay on his back, motionless, slipping towards unconsciousness, he heard Riley's loud yelp as the dogs bit her, one with a tight grip around her neck and shaking vigorously.

"I was centimetres away from the beasts and I was lucky I didn't get my face ripped off.''

As the dogs attacked, four people in the area rushed to help. The dog released Riley after a sustained effort by the group, he said.

Luckily, the helpers had the strength and the means needed to break the grip of the attacking dog.

One of the group rushed Riley to a vet to get her throat stitched.

Under instruction from the Dunedin City Council, the owner of the two dogs paid the $800 vet's bill, Mr Holland said.

He did not know the four people who helped but wanted to thank them for saving Riley's life and possibly his life, too.

He was sure if the dogs had killed Riley, they would then have turned on him.

Since the attack, he believed the council had put restrictions on the dogs, including deeming them dangerous, which required them to be muzzled.

"I'm not satisfied with that - I want them gone.''

He wanted both dogs to be destroyed before they hurt anyone else.

Before the attack, 4-year-old Riley was an active dog but since then, she did not want to leave her bed.

"She has hardly moved.''

Mr Holland said he had struggled to sleep since the attack.

The dogs' owner declined to comment when contacted by The Star yesterday.

"No outcome has yet been determined. We will advise both parties once a decision has been reached.''