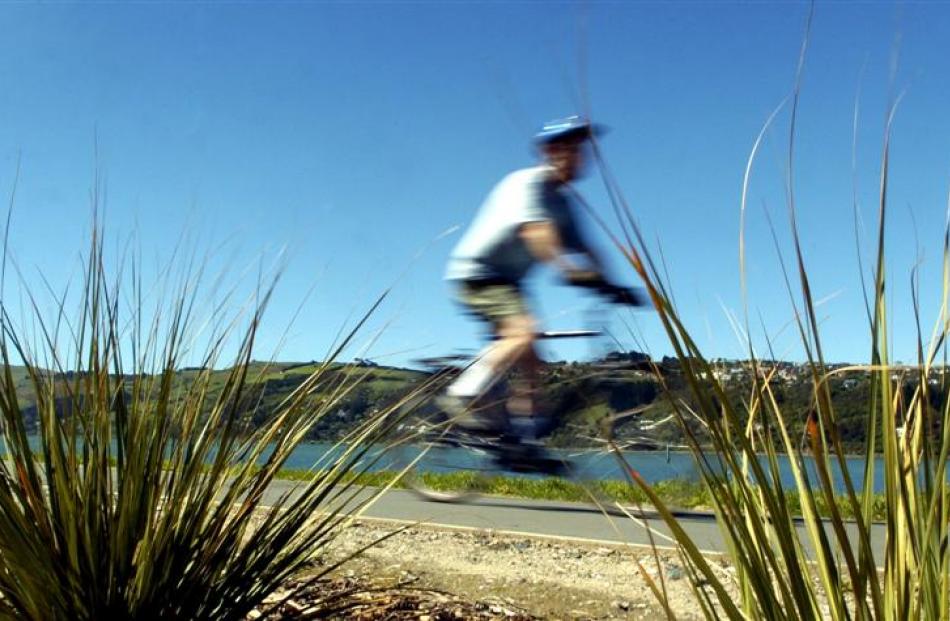 A cyclist on the harbour cycleway. Photo by Gerard O'Brien.

However, concerns have also been voiced that any decision not to proceed with the nearly $450,000 project could put at risk more than $15 million in New Zealand Transport Agency funding.

Councillors at yesterday's 2013-14 draft annual plan hearing were asked to approve a carry-forward of existing budget surpluses to pay for the work, at a total cost of $447,100, during the coming financial year.

The money would pay for construction of a link between Fryatt St and Ravensbourne Rd, connecting cycleways that stopped either side of the Water of Leith and also improving pedestrian access to the stadium.

Council city operations general manager Tony Avery said the link had been planned as part of the $25 million realignment of State Highway 88, but complicated land negotiations had delayed the work until now.

The council's budget for the cycleway link would pay for land acquisition from Port Otago, as well as fencing, lighting and other work needed as part of the project.

However, several councillors yesterday questioned why a purpose-built bridge, or a clip-on to the SH88 bridge over the Water of Leith, were not considered.

Without them, cyclists would be forced to make up to 12 turns while negotiating underpasses beneath the SH88 bridge and the new link, in an area where blind corners had already prompted safety concerns.

Cr Richard Thomson said it would create a ''grand prix circuit'' for cyclists, which Cr Lee Vandervis added would be complete with ''hairpin corners''.

Mr Avery said a more direct route across Port Otago land to Fryatt St had been considered, but ruled out as ''unacceptable''.

That was because Port Otago wanted to retain the right to prevent access temporarily or permanently if its commercial needs demanded it, he said.

A clip-on bridge or a new, purpose-built bridge were options, but had not been considered in detail and would not be covered by the available budget, he said.

The council had originally budgeted $140,000 for the link when the SH88 realignment project was planned, and Cr Vandervis criticised the escalating costs yesterday.

He did not believe the spending could be justified, believing the money was better spent on a new bridge and a more direct route.

Cr Jinty MacTavish questioned whether the New Zealand Transport Agency would consider increasing its funding for the link, or allowing the council to defer its plans until funding constraints eased.

Mr Avery said the link project had been a central part of winning NZTA funding, and cautioned against trying to renegotiate the arrangements, which council transportation planning manager Sarah Connolly worried could put NZTA funding at risk.

Cr Vandervis asked if that meant the NZTA could attempt to ''claw back'' all $15.4 million of its funding for the SH88 realignment, which it had already paid to the council, if the link did not proceed.

Council chief executive Paul Orders said it was difficult to ''second-guess'' that, but the implications of any change would need to be considered.

Councillors eventually voted to carry forward the surplus budgets, but asked for a report on options - including a purpose-built bridge or a clip-on - to be considered by the council's infrastructure services committee.

Committee chairman Cr Andrew Noone said the route was ''not ideal'', and the funding was ''a significant lump of money'', but the work would plug a missing link in the cycleway network.

''We have got a job that's not quite completed here.''

Cr Vandervis said the entire SH88 realignment was ''a lesson in missing links'' which left the council searching for ''ad hoc solutions''.