New CEO getting feel of city 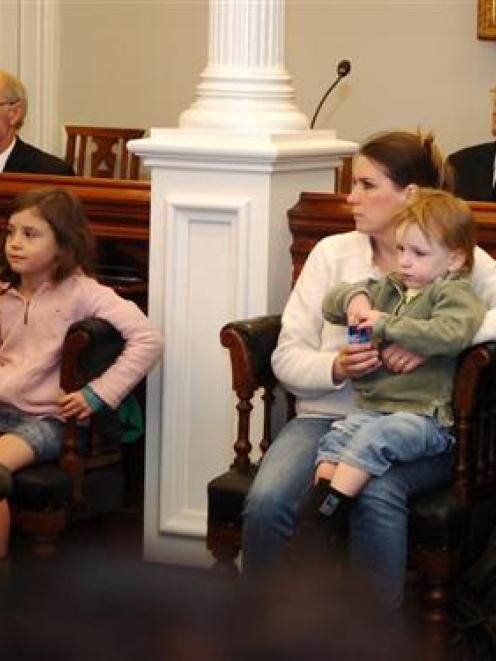 Newly appointed Dunedin City Council chief executive Paul Orders speaks at yesterday's full council meeting, watched by wife Jayne and children (from left) Menna (8), Leo, (3), and Finnian (6). Photo by Jane Dawber.
The next time you dine out, the chances are a man with a thick Welsh accent may tap you on the shoulder and ask for your candid opinion on the state of local government in Dunedin.

Dunedin City Council chief executive Paul Orders wants to meet as many people in the city as possible in the coming weeks to familiarise himself with the issues and the pressures affecting the city, in his bid to improve and develop Dunedin into "an even better place".

"I want to do that reasonably rapidly.

"Wherever I manage to go - local restaurants, cafes - I'm keen to strike up conversation with people about the Dunedin City Council and the quality of their services.

"It would be remiss of me to come into this organisation without fully understanding the challenges facing the city.

"Speaking with people like local taxi drivers - all that will help in my education."

His stance is perhaps linked to what he calls his "approachable" style of leadership.

"I will be a chief executive who will seek to understand community concerns.

"I will be attentive to concerns, pressures, views ... "

Mr Orders has only been in Dunedin for 10 days, but already considers himself a "regular reader of the Dunedin media".

"My staple for breakfast has become a glass of orange juice and the ODT.

"It has given me a sense of the temperature of the local issues."

He was formally welcomed on his first day at work with a mihi whakatau (welcome) and karakia (prayer), led by Otakou runanga chairman Edward Ellison, at the start of yesterday's full council meeting.

Watched by his wife and their three children, Mr Orders was also greeted by Mayor Dave Cull, and responded first in Welsh, then with a few words of Maori, then English.

But, despite it being only his first day in office yesterday, Mr Orders was already fending off the tough questions from media - How are you going to get this city out of debt? Do you think the stadium is a bottomless pit to throw money into? What are you going to do about our rates bills?

Mr Orders made it very clear during a meet and greet earlier yesterday, that he would not be answering those questions until he had finished updating himself on the pressures and issues affecting the city.

"They can't be wished away. You have to deal with them.

"But, firstly, I need to understand the organisation and the pressures it's under. Then I have to formulate a response to deal with that.

"I'll do that with the mayor and councillors."

By 11.30am yesterday, Mr Orders said he had already met his staff, his support staff, Mr Cull and acting chief executive Athol Stephens.

"I had a meeting with the mayor and acting chief executive to discuss protocols, standing orders and procurements - all the ABC of being a chief executive in New Zealand.

"We have also had early discussions on the process of how we might move forward in the organisation." - Additional reporting Chris Morris