No hope of saving house after landslip 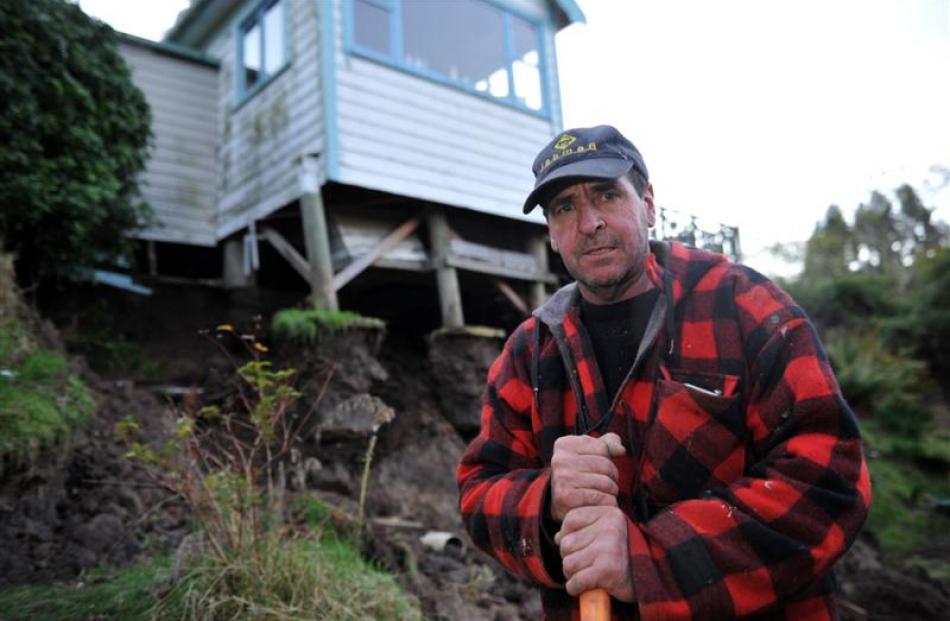 Marty Duffy believes his Northeast Valley house will be a write-off after a ''canyon'' opened up in his section. Photo by Gregor Richardson.

A Northeast Valley, Dunedin, man whose kitchen was left hanging in mid-air after a ''canyon'' opened up in his section accepts he is unlikely to be able to return home.

Marty Duffy, whose house is up a driveway at the end of Allen St, lost hope of saving his house after returning to his property yesterday morning to find more earth had been swept away beneath his kitchen by a torrent of water coming down from Pine Hill.

''I was all ready to come today and start trying to save it, but now that I have seen how bad it has got, I can't see any safe way of [saving it].''

With little hope of saving his house, he said he knew how people in Christchurch must have felt after losing their homes in the earthquake.

He rang the Earthquake Commission (EQC) to inform it of the situation and was told the damage to his property was the ''worst case they had heard of'' relating to the Dunedin flooding.

He spent yesterday morning clearing his driveway with a digger so he could access his vehicle.

Now it was a matter of waiting for the EQC to assess the damage and pay out on his claim.

''... hopefully, it takes a bit less than four years like up in Christchurch.''

Mr Duffy, his cat Honky and his dog Belle, were evacuated by police about 4pm on Wednesday after the earth slipped away from in front of his house about an hour earlier.

''I just heard all this banging in the kitchen and went out there and opened the window to have a look outside and the window wouldn't open.

''So, I looked out the other window and ... where there was a paddock there is now a bloody great canyon,'' he said.

He stayed the night at his partner's house - she lives on the opposite side of the valley - and with his house teetering on the edge of the slip is likely to be there for a bit longer.

His partner, Mel Peck, believed the 4.7-magnitude earthquake centred near Lee Stream on Monday night could have made the hill unstable, contributing to the slip.

GNS Science engineering geologist Chris Massey said given the size of the quake and the severity of the shaking it was unlikely it contributed to any slips.

An EQC spokeswoman said 13 landslip claims resulting from flooding in Dunedin were received.

That was on top of 84 damage claims lodged so far with EQC as a result of Monday's quake - which was up from 25 claims the day after the quake.

On the night of August 8, 1979, a major landslip in Abbotsford, Dunedin, caused the destruction or relocation of 70 houses and the evacuation of more than 600 people. No-one was killed. It remains the largest landslip in an urban area in New Zealand.