Paid late and still left out of pocket 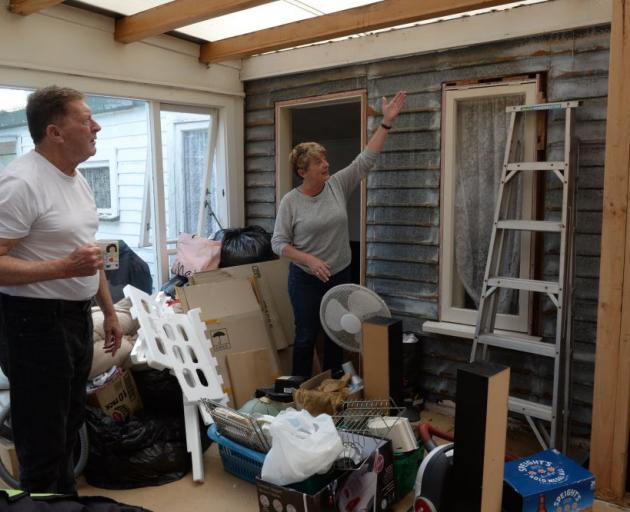 Julie Myers and Jim Baird, who faced six months of stress before finally receiving an insurance payout that has left them out of pocket and frustrated. Photo by Linda Robertson

Julie Myers expected to wait a few months for her insurance payout after her South Dunedin home was inundated by floodwaters last June.

Instead, she waited until Christmas Eve, only to be left out of pocket and facing a gloomy reality - her home at 20 Corunna St, St Kilda, is unlikely to be fixed before the first anniversary of last year's flood.

‘‘It's just been a really difficult and frustrating and annoying process for us,'' she told the Otago Daily Times.

On the day of the flood, Mrs Myers returned home to find her backyard submerged and water lapping into a sunroom, bedroom and shed.

Sandbags stopped the water creeping into the rest of her home, but carpets and other contents - submerged in contaminated water - were lost.

But instead of a speedy resolution, Mrs Myers (58) and husband Jim Baird (72) endured a procession of inspections and spent hours on the phone, on hold or waiting for answers.

Each additional request for a report or inspection added weeks more delays, as well as extra stress, she said.

‘‘We had about five different inspections completed. I did say to the insurance company ‘are you looking for a reason not to pay me out? Because this is just getting ridiculous'.''

She also found a ‘‘reasonable-sized crack'' in the wall connecting her house with its sleepout, caused by the subsidence of land left sodden by the flood, she said.

Her insurance company, IAG New Zealand, initially refused to cover that damage, saying it was not responsible for land movement, she said.

Eventually, IAG delivered a payment of $74,000 on Christmas Eve - nearly six months after the flood.

IAG described it as ‘‘generous'', but Mrs Myers has her doubts, saying she had been ‘‘naive''.

It emerged during her claim that her back bedroom and shed, built before 1970, did not have the proper consents, which needed to be rectified as part of the rebuild.

IAG refused to cover part of that cost, including the cost of obtaining consents, which Mrs Myers agreed to pay to move the claim along.

IAG's settlement also did not cover the cost of whatever might be still lurking under her floorboards, which no-one had checked yet, she said.

‘‘In hindsight, I don't think they were being particularly generous. I think they were wanting just to say ... ‘just take it, sign this, and we're abdicating any more responsibility'.

‘‘I really feel for those people in Christchurch who are five years down the track and still have got no resolution. I understand their pain.''
IAG spokeswoman Melanie Roberts, in a statement to the ODT, acknowledged the process could be stressful and appear drawn-out.

But the couple's claim had been ‘‘rather complex'' due to ‘‘pre-existing issues'' at the property, including historic land settlement and non-compliance and construction issues.

IAG had agreed to pay for flood damage and the cost of bringing some parts of the home up to code requirements, but not others, including a bedroom extension not built to consent requirements.