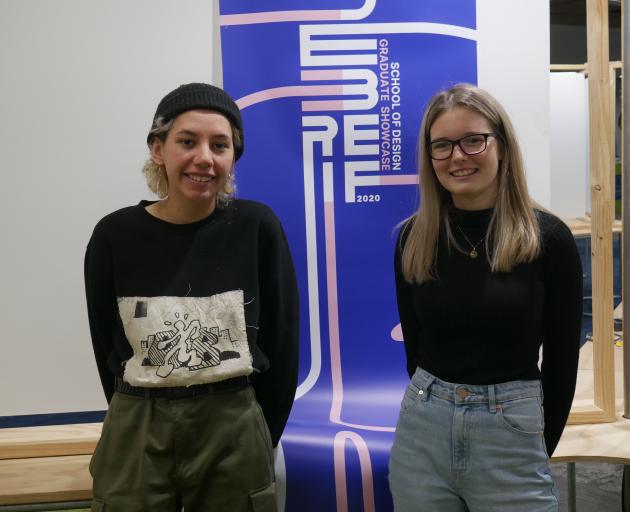 Otago Polytechnic design students Zoe Morehu (27), of Hamilton, and Courtney Forbes (20), of Oamaru, are preparing to show their projects at the ‘‘Debrief’’ exhibition opening tonight. PHOTO: JESSICA WILSON
Otago Polytechnic students are excited to end the year on a positive note.

Communication, fashion and product design students will show their projects in an exhibition, Debrief, which opened in the polytechnic hub on Thursday.

Product design student Zoe Morehu centred her project around mahi raranga (flax weaving) and the importance of connecting it with whakapapa and cultural reclamation.

In doing so, she worked with the Kokiri Training Centre in South Dunedin, where she and two others taught 27 people to weave wahakura baskets.

In the exhibition, she will also show her artwork. which earned her a finalist spot in the Designers Institute of New Zealand Best Design Awards.

She made a contemporary pare, which traditionally sits above the front door of a marae.

She got the idea while working on another project earlier in the year, which she was keen to carry on with.

"I liked how it was involved in the polytechnic," Ms Forbes said.

The signs she created are about to be printed and will be installed next year.

Ms Morehu said the Covid-19 pandemic had a massive impact on the year and influenced her work.

"I wouldn’t have produced the work that I did, not if Covid hadn’t have happened."

"It’s definitely influenced a lot of design work that I’ve seen this year."

The pair were looking forward to showing their friends and family the work they had produced.

It would also be nice to see what other students had been working on, Ms Forbes said.

Ms Morehu said it would be a great way to finish the year.

"End it on a positive note and celebrate the fact that we made it, we’re graduating in 2020."

The exhibition will be open to the public at the weekend.