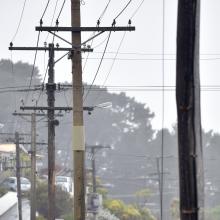 Photo: ODT files
Worksafe has placed conditions on Aurora Energy over concerns its pole replacement programme could put workers and the public at risk.

Government agency Energy Safety, which is a part of WorkSafe, issued the conditions last month to make sure Aurora prioritises public safety as it fixes compromised poles across Otago.

The conditions were included in an ``instruction'' supplied to the Otago Daily Times under the Official Information Act (OIA).

A representative from Aurora sister company Delta said yesterday the conditions formalised a process it developed and helped ensure its pole programme was carried out safely.

In the instruction addressed to Aurora chief executive Grady Cameron, Energy Safety manager Mark Wogan said it was issuing the conditions because of concern the public and workers could be put at risk.

``WorkSafe has reasonable grounds to believe that there is increased risk of danger that may result in serious harm to members of the public, and to workers, or significant property damage associated with the fast-track pole programme,'' Mr Wogan said.

The instructions included not allowing outside contractors to work on lines while they were live and not allowing workers to climb poles which had been red-tagged or were adjacent to red-tagged poles.

Staff from Aurora sister company Delta could work while lines were live, but only under a strict set of circumstances and the decision-making process on each instance of live work must be recorded.

Aurora must also prioritise condition-zero poles and compromised poles in high-risk areas, such as near schools, areas of public assembly and high traffic pedestrian areas.

It must also report back to WorkSafe every month on its progress on the pole programme.

The instructions say they apply to Aurora's plan, announced in October last year, to replace ``approximately 3000 poles'' by the end of this year.

Since October Aurora changed its plan and now aims to ``remove the risk'' of about 2910 poles, which apart from replacement also included reassessing or repairing poles.

Delta general manager network operations and risk John Campbell said since the pole programme began in November last year its contractor teams had been using a detailed process and methodology agreed with WorkSafe and confirmed in the instruction provided to the ODT.

``By its very nature, an expanded project of this size and scale always carries a degree of risk.

``The instruction formalised the process Aurora Energy developed and now guides the work of all our teams,'' Mr Campbell said.

The requirement for outside contractors to work on ``de-energised'' lines added to the time it took to replace compromised poles and meant more power outages.