Sea may win fight for coast 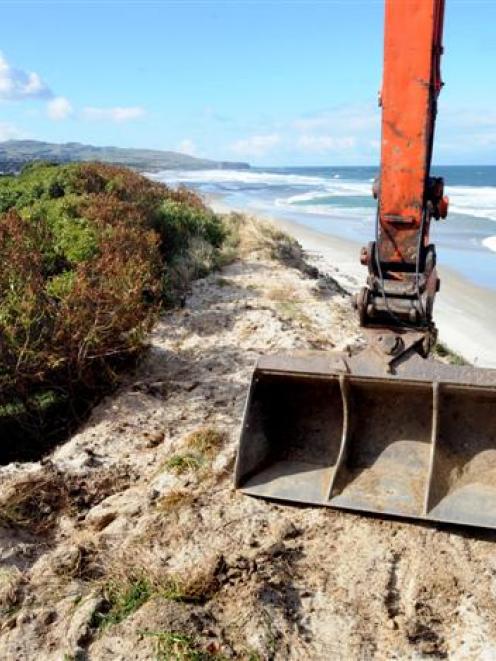 A digger works on top of the sand dunes at Middle Beach. Photo by Stephen Jaquiery.
Coastal erosion could force Dunedin's Kettle Park and nearby dunes to be abandoned to the sea, but only after millions of dollars are spent clearing potentially toxic industrial waste from an old landfill lying underneath.

The idea of a "managed retreat" from Middle Beach and Kettle Park is one of two recommendations to come from consultants Tonkin and Taylor, as the Dunedin City Council considers how to respond to coastal erosion threatening the area.

The suggestions came even as council staff yesterday warned of further erosion likely in the area over the next few days, with large swells having stripped sand from the beach and dunes between St Clair and St Kilda in recent days.

The Tonkin and Taylor report, made public yesterday, recommended a managed retreat or construction of an inland buried backstop wall to protect critical areas along the coast, over the next 10 to 50 years.

Initial estimates showed the work could cost between $8 million and $19 million, with any retreat including a clean-up of the old landfill underneath Kettle Park.

Members of the public were warned late last year to stay clear of the area's dunes after traces of arsenic, asbestos and other industrial chemicals from the landfill were detected.

The Tonkin and Taylor report was commissioned last year as part of council planning for the Ocean Beach Domain, which began in 2007 after severe storms caused significant erosion in the area.

The domain stretches about 4km from St Clair to Lawyers Head and includes Middle Beach, where the most serious erosion problems have occurred.

The report presented a draft management plan to be considered by councillors at next week's community development committee meeting, before being released for public consultation.

Dunedin Mayor Dave Cull declined to comment yesterday, saying he was yet to read the finished report.

Council Ocean Beach project team chairman Cr Colin Weatherall said consultation was still required before any decisions were made, which was likely to be several years away.

He would not discuss his personal views when asked about the recommendations or whether he considered the costs affordable.

"Certainly, at the moment, cost is a very large driver in council's budget numbers ... I don't have an opinion on the dollars. I'd rather see what the solution is first and then how we fund it secondly.

"We've got to come up with a practical solution long term that's good for Dunedin city and the community. Therefore, we need to listen to the community and what they want to do."

The report warned erosion had already exposed industrial waste from the landfill, and expected sea-level rise - bringing waves with greater energy - increased the risk of further erosion over the rest of this century.

The report discussed 13 possible options before recommending the council continue its "holding pattern" of sand replenishment and other minor work to maintain the beach over the next 10 years, at a cost of between $4 million and $8 million over the period.

More expensive solutions would be needed over the next 10 to 50 years, and the report recommended a managed retreat or buried backstop wall.

Initial estimates put the cost of an inland wall at $8 million to $13 million, or $11 million to $19 million for a managed retreat including cleaning up the landfill, the report said.

Continuing erosion would "almost certainly" expose more of the old landfill, possibly allowing industrial waste to escape on to the dunes and beach, but cleaning up would remove contaminated material and keep the landfill material inland.

A managed retreat would allow the coastline to settle in a more natural position, and the council should plan for a shift of up to 30m inland, the report suggested.

"The proposal would have a significant effect on Kettle Park, effectively removing the ability to have sports fields at this location."

Doing nothing was also an option, but could allow more of the landfill to be exposed and could mean erosion might also threaten about 12 properties near the western end of nearby Victoria Rd.

The report covered the length of the domain, but concluded the central area between the eastern end of the St Clair seawall and the St Kilda surf club - including Middle Beach - faced the highest erosion risk.

The lowered sand level meant a stairway on a track in the area was closed. The track would be "closely monitored" because of the threat of further erosion, he said.

The need for repairs would be assessed next week.