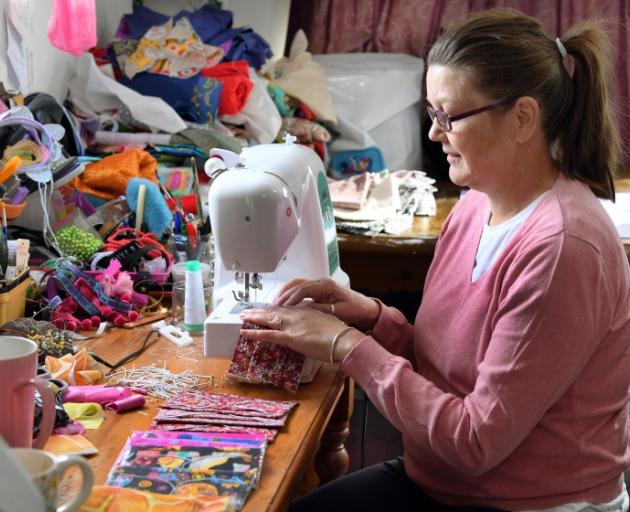 Sewing up a storm ... Dunedin grandmother Michelle Webb has made more than 350 masks for the vulnerable. Photo: Stephen Jaquiery
A Dunedin woman started off making a mask for her 2-year-old grandson to wear to the hospital.

Now, Michelle Webb has made more than 350 free masks during lockdown for vulnerable people in Dunedin and as far away as Japan.

Ms Webb said she had been sewing since she was 8.

When grandson Phoenix Ratahi was diagnosed with stage four embryonal tumours with multilayered rosettes (ETMR), a rare brain cancer, she sewed a bag for his Hickman line and other tubes.

‘‘I started making them for other children as well. It took off.’’

So, when her daughter, Lucy Webb, requested a mask for Phoenix’s most recent hospital visit, Ms Webb began to sew, making more than 15 masks each day.

‘‘I shared what I was making and it went from there, people started requesting them. It has been my way of feeling useful through it all.’’

Happy and protected ... Two-year-old Phoenix Ratahi wears a mask made by his grandmother. PHOTOS: STEPHEN JAQUIERY
The masks were triple-layered, having a non-woven polypropylene layer between two cotton fabrics.

Lucy Webb said it was ‘‘amazing’’ to have a mother on hand who could help with practical items.

‘‘She’s always been good. We knew we had to go to hospital just before the country went into lockdown for Phoenix’s post-MRI and I asked her whether she could make him a mask as we had run out.’’

She said lockdown had been ‘‘just another day’’ for the family, who had spent more than 200 days in isolation with Phoenix last year.

‘‘We are used to quarantine with Phoenix.’’

Phoenix was building up his immunity, and had MRI scans every three months to check on his progress.

‘‘He’s your typical 2-year-old, and we couldn’t have come this far without people like mum and the Child Cancer Foundation.’’

Ms Webb said she had no plans to slow down producing the masks, which she did not intend ever to charge for.

‘‘My friend wanted to send some to her daughter in Japan. I’ve had requests from the UK.

‘‘I’m doing it out of love. They’re a necessity at the moment not a luxury.’’

@Michelle - can you tell me please what you are using for your non-woven polypropylene layer . I have been using dressmaking interface fabric (not iron on), but have not been able to find out if it is polypropylene or not, it is non-woven.