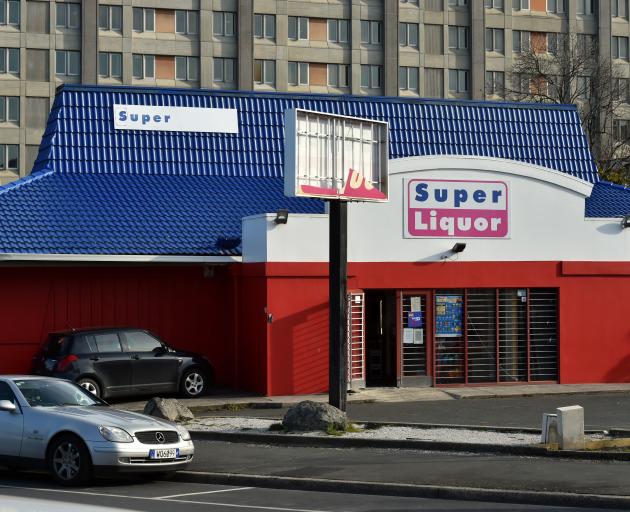 Dunedin's Malcolm St Super Liquor has been given a three-week suspension after serving alcohol to an underage boy. Photo by Gregor Richardson.
The owners of seven Dunedin liquor stores, on thin ice after a 17-year-old was sold RTDs during a police sting, say they have been unfairly treated.

The indiscretion last October resulted in the Alcohol Regulatory and Licensing Authority suspending their licence for Super Liquor Dunedin, in Malcolm St, in a decision released yesterday.

Police had argued for all seven of Patricia and Kenneth McCarthy's Dunedin outlets to be stripped of their licences, noting there had been seven cases of them selling to minors in nine years.

The authority felt such a punishment would be too harsh, but warned the McCarthys they might not get off so lightly next time.

''It needs to be made clear to the respondents, however, that any future transgressions will most certainly put the licences in jeopardy,'' the decision said.

Speaking to the Otago Daily Times after receiving the decision yesterday, Mrs McCarthy said they had been treated unfairly.

Having to wait since the hearing in May for a decision meant four months of stress wondering whether they would lose their businesses.

''It's been totally unfair on our staff.''

She pointed out that many of the underage customers involved in police stings looked ''quite old''.

In the most recent case, the man behind the counter was ''adamant'' he looked older than 25 and after looking at video footage she could see how he could have thought it.

''The guy looked way older than his years.''

She disputed the suggestion from police they did not run their outlets responsibly, saying they had run liquor outlets since 2001, employed experienced staff and made sure they were fully trained.

She also felt the threat from the authority that they could lose licences following one more indiscretion was unfair.

No matter how well staff were trained, there was always the possibility of human error.

Sergeant Ian Paulin said in the decision there had been no changes in the way the pair operated their outlets, despite the repeated indiscretions.

The failures were connected by a common theme of a licensee who employed young, inexperienced people who worked by themselves.

The man behind the counter did not ask the boy's age.

Mrs McCarthy said in the decision they had recently made changes to the way they operated, which included all staff having to ask for identification from anyone who looked under 30, rather than the previous under-25 policy.

They had a zero-tolerance policy in regard to managers committing any breaches of the Act and most cases resulted in dismissal.

In coming to its decision the authority said it was disappointed the couple had not learnt from past mistakes.

''To say that we are extremely disappointed that this licensee has taken so long to come to the realisation of the position it is in, would be an understatement.''

However, the authority recognised it was now making a ''more concerted'' effort and hence felt cancellation of the licences would be a ''disproportionate sanction at this stage''.

The Malcolm St store's licence will be suspended from September 26 until October 17.