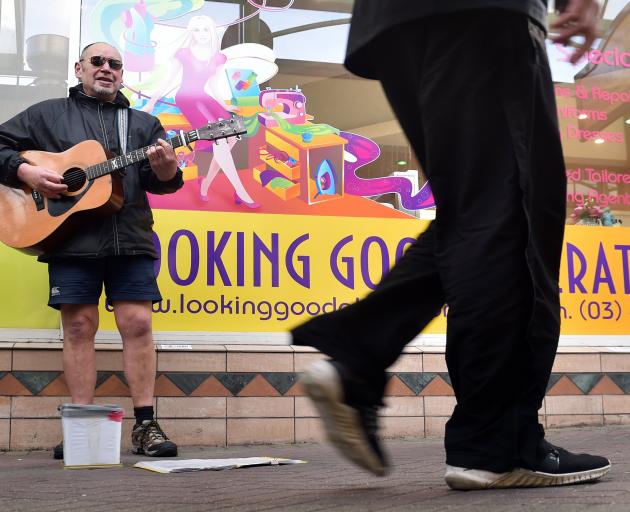 Dunedin busker Jackson Caine may not be able to play in his usual spot in Albion Lane if a proposed bylaw goes ahead. PHOTO: PETER MCINTOSH
There are concerns a new street trading bylaw in Dunedin would have a "chilling" impact on busking and street performance in the city.

Under proposed changes buskers in Dunedin will have to maintain a 3m distance from pedestrians at all times in the central city and be 1.5m from pedestrians elsewhere, be at least 6m from intersections, seek permission from retailers before performing outside their stores and reduce performance times from a 90-minute maximum to a 60-minute maximum.

The changes are part of the Dunedin City Council’s proposed Trading in Public Places Bylaw.

Fringe Festival director Gareth McMillan said he was disappointed to have found out about the consultation on the bylaw only a week before it closed on Monday. He had major concerns about the proposed changes, which would affect future festival performers.

The proposal of a 3m distance would will rule out many of Dunedin's central busking locations, including the popular Albion Lane which was often inhabited by buskers.

"The one-and-a-half metre restriction will rule out many suburban commercial locations in Dunedin, including South Dunedin, where footpaths are narrower."

The proposed new requirement to seek permission from retailers before performing created an additional barrier.

"This will have a chilling effect on busking and street performance.

"Council has not sought feedback from holders of current busking licences, or arts organisations that work with street performers, despite holding their contact details," Mr McMillan said.

"A creative approach from council would focus on enabling busking, street performance and footpath art."

Dunedin man Jackson Caine said he had been busking for two years and donated the money he received to charity.

"Busking is a form of therapy for me, it’s very healing to play with no expectations."

He already sought permission from nearby retailers when busking and was concerned his favourite spot in Albion Lane, with "beautiful acoustics", might be jeopardised.

"I think it would be a loss for the people of Dunedin if we didn’t encourage buskers, especially in town.

"They bring a vibrancy to the city, they’re an important part of any city."

The council last year voted to review its Mobile Trading and Temporary Stall Bylaw early as a response to e-scooter safety concerns.

The proposed new bylaw covers street performers such as buskers, fundraisers, footpath artists and other commercial users of footpaths, and requires e-scooter and bike rental businesses to have permits and comply with certain conditions.

A council spokesman said 64 submissions were received. Most (57) included feedback on street performing or busking.

A bylaws subcommittee will hear submissions on the proposed bylaw on October 6.

A typical overbearing beaurocratic response. Let's restrict every aspect of life in response to one specific problem. Shine ar$&d beaurocrats with nothing better to do trying to justify their high salaries

On the one hand, the DCC wants to rid the CBD of cars to provide a congenial space for pedestrians, cyclists and scooter riders, a place where people will congregate and enjoy not only shopping but the vibrant atmosphere. Wasn't that the vision being promoted to us?
Relaxed yet lively, up to a point. Sitting on council-supplied wooden structures, yes. Watching children on mild days playing in a sandpit in the Octagon and drunks urinating in it at night, yes. Music blaring from speakers at various places such as the corner of Lower Stuart St and the Octagon - yes.
Live music, local and travelling musicians busking free or for donations willingly given depending on their talent and luck - no.
Not banned, of course. That would look control-freaky, not vibrantly community-minded.
No, "merely" restrictions making it all but impossible to find any space where a musician could be heard, could get donations in the hat or guitar case, and yet "maintain a 3m distance from pedestrians at all times in the central city and be 1.5m from pedestrians elsewhere, be at least 6m from intersections".
The New Dunedin Sound: the sound of boredom. Thanks for nothing, DCC.