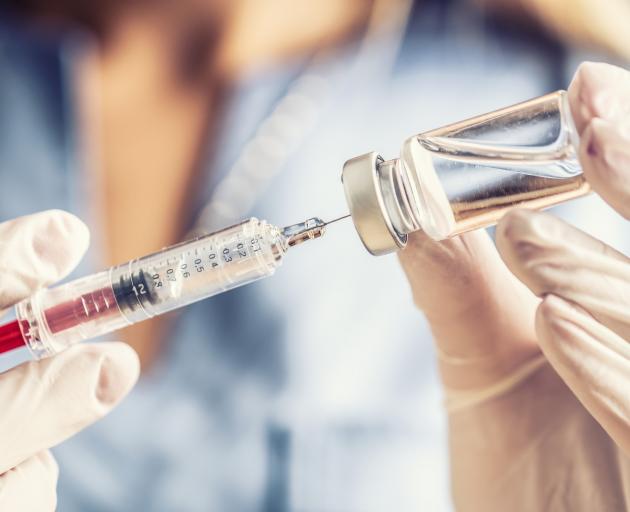 Photo: Getty Images
New Zealand stocks of the Covid-19 vaccine are running low, and health boards have been instructed to slow down the rate at which they are administering them.

Several people have contacted the Otago Daily Times to say they have been told that the South had low stocks of vaccine.

A senior clinician, speaking anonymously, told the ODT that vaccine supplies were low across New Zealand.

"People giving out vaccines have been told to cut right back because there is not enough vaccine for the country to continue at the current rate.

"There is not much transparency from the Ministry of Health regarding vaccine availability."

Last week Southern District Health Board chief executive Chris Fleming told a board meeting the region’s vaccination efforts could go faster, but would need to slow down due to supply issues.

Latest health ministry statistics show the board was 10% ahead of plan for how many doses it was expected to have administered by now, and as a whole the country was also 10% ahead of expectation.

On Tuesday Covid-19 Response Minister Chris Hipkins, who has previously said that July would be a "bumpy" month with concerns over vaccine supply, announced an estimated 1million doses of vaccine would arrive in New Zealand next month.

A spokeswoman for the minister said she was not aware of a blanket instruction to DHBs to slow vaccination rates.

There were enough doses of vaccine in New Zealand to meet the vaccine rollout plan, she said.

However, supply issues might have meant that some DHBs which were ahead of plan had been asked to drop back to injection rates which met the ministry’s schedule.

"We do have more stocks arriving in July and are expecting to ramp up the vaccination programme again then."

Dunedin man Don Shaw (80) said he was at the Gardens Medical Centre in North Dunedin yesterday for an appointment, and asked when he was going to get an appointment for a Covid vaccine shot.

He said staff there told him it would not be likely until July or August.

Not satisfied with that response, he went home and rang the 0800 Covid line.

The woman who answered that call told him given his age and circumstances that, yes, he should be at the top of the list, but on checking told him there was no appointment available at the Meridian vaccine centre in Dunedin because they had "run out of vaccine", Mr Shaw said.

She told him to call the 0800 number again in a week.
He said he knew of someone who had received a vaccine shot at the Meridian yesterday, so wondered if that was just something the people on the end of the 0800 line were telling callers.

Another reader contacted the paper yesterday to say he had just tried to make an appointment through the 0800 number to get vaccinated and was told he could not do it as "the system is booked out".

He was over 65 with underlying health issues and had been told to try again next Thursday, which he did not think was good enough, he said.

Southern DHB vaccine rollout incident controller Hamish Brown said he was "not aware of any cancellations other than those that were rescheduled due to the nurses strike".

"There are around 100,000 people in Group 3 in the Southern district and it will take some time to get through them all.

"It is a staged rollout and we are always needing to manage the number of people booking at any time.

"Any questions around vaccine supply should be directed to the Ministry of Health," he said.

Im torn between some concerns and being pleased that this means that people are getting vaccinated!

It is odd it was so easy to determine deaths from COVID and now so hard to determine if the deaths are from the vaccine...

What happened to early and hard?

An almost impossible to understand communication process from the Southern District Health Board (SDHB): likely to have not reached others in 'Group 3 being +65' is described below:
26 May 21 received a cell phone text: [ Kio Ora "to My Name". Dunedin North Medical Ltd has indicated that you are eligible to receive the FREE Covid 1-19 vaccine now. Reply Stop to opt out: followed by an internet link].
I could not open the link on my phone. I waited for Dunedin North Medical Ltd (DNML) to contact me as was their usual good process when scheduling a vaccine. By 10 June as I had not heard anything; I rang DNML who advised they did not send that text; which had been sent by SDHB.
I rang SDHB who advised the earliest appointment for vaccination was 3 August 21. People had already booked all possible appointments before 3 August.
Conclusions: The Southern District Health Board need to improve their communications by:
- following the normal practice of putting their name on their communication,
- providing a telephone number so those who do not use internet on a cell phone are enabled to be able to reply to the SDHB.

Not sure we can trust what the ministry says. They need to fall in-line with the PR machine.