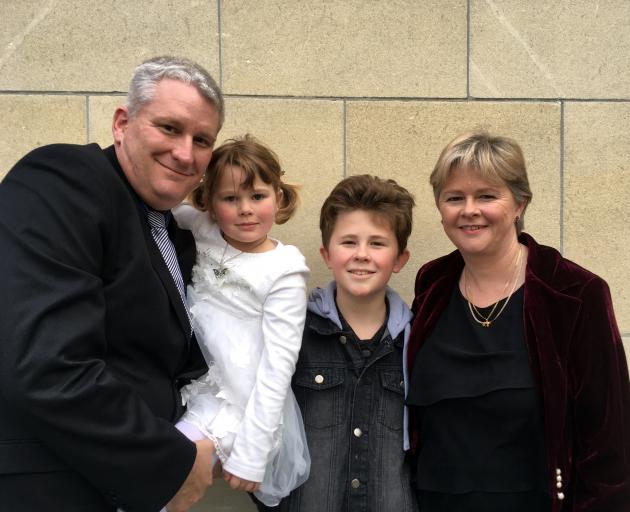 The Hannaford family (from left) Garth, Ashleigh, Robert and Sharon, of Mosgiel,attend a citizenship ceremony in the Dunedin Centre on July 4. Photo: Shawn McAvinue

A South African family have lived in several parts of New Zealand for the past 10 years but when they arrived in Mosgiel they decided to settle and become citizens.

Garth and Sharon Hannaford and their then 1-year-old son Robert, left South Africa to live in New Zealand about 10 years ago.

Mr Hannaford said the family had ‘‘lived all over New Zealand’’ including Auckland, New Plymouth, Te Awamutu and Cambridge.

The family moved to Mosgiel about a year ago for Mr Hannaford’s job as a fertiliser company sales manager.

Mrs Hannaford is an author.

‘‘So it doesn’t matter where I get dragged around the country,’’ she laughed.

Robert (11), a Taieri College pupil, joined his parents on stage in the Fullwood Room of the Dunedin Centre as they swore allegiance to Queen Elizabeth II in front of Dunedin Mayor Dave Cull last week.

Ashleigh (5), an East Taieri School pupil, joined her family on stage despite already being a New Zealander.

‘‘She was the only Kiwi in the family,’’ Mrs Hannaford said, after the ceremony.

Mrs Hannaford said the family had always planned to become New Zealand citizens but were waiting until they settled.

Mr Hannaford said they were settled in Mosgiel

‘‘I enjoy the outdoors. There is so much to do down here.’’

He ‘‘loved’’ fishing and cycling.

Mrs Hannaford rides horses, and has a horse and a pony in Brighton.

Robert said highlights of living in Dunedin included bodyboarding at Brighton Beach and playing in the snow in Mosgiel.