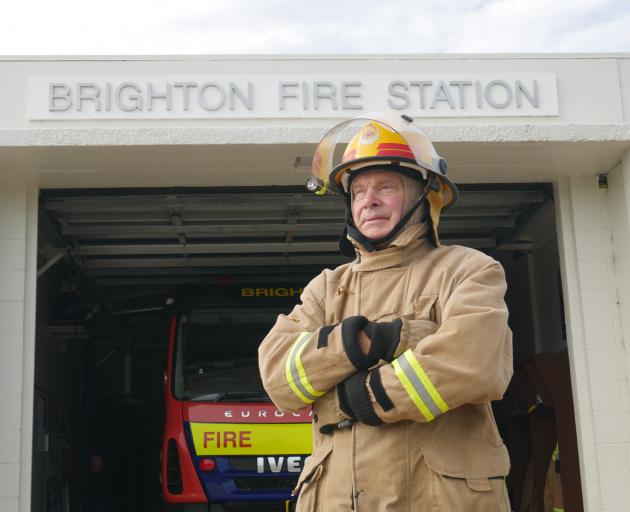 Volunteer firefighter Colin Astle: "‘You look after your buddy and he looks after you.’’ PHOTO: JESSICA WILSON
A Brighton firefighter has been recognised for 50 years of service.

Senior firefighter Colin Astle (73) will be presented with the double gold star award at an afternoon tea on Saturday.

So far, he has also clocked up about 27 years as a volunteer at the Brighton station.

During his role in the permanent brigade, he worked at all stations in Dunedin, including the two rescue stations — Willowbank and Lookout Point.

Firefighters from rescue stations attend motor vehicle accidents and medical events, as well as fire calls, and have different equipment, such as spreaders and cutters.

The move to another station ‘‘did me good’’, he said.

Back then, there was an expectation to ‘‘toughen up’’ whereas now there was plenty of support for firefighters.

He had more injuries when working as a plumber and drainlayer than when he was a firefighter.

‘‘You’re looked after. You can’t go anywhere by yourself, you’ve got to have someone with you.

‘‘You look after your buddy and he looks after you.’’

The main changes he had noticed over the years were the improvements in communication and health and safety.

When he joined, firefighters could use their breathing apparatus only when instructed by the chief officer.

The uniform and truck had also improved with the times.

Mr Astle said the worst fires he attended were house fires because of the impact they had on children.

‘‘Kids have got to feel safe somewhere and I think it affects them for the rest of their lives.’’

He was a huge advocate for smoke alarms and had seen many lives saved because of them.

As a volunteer, he attended more medical events and often dealt with people in the community whom he knew.

Mr Astle said he enjoyed the camaraderie of the brigade and had worked with some wonderful people.