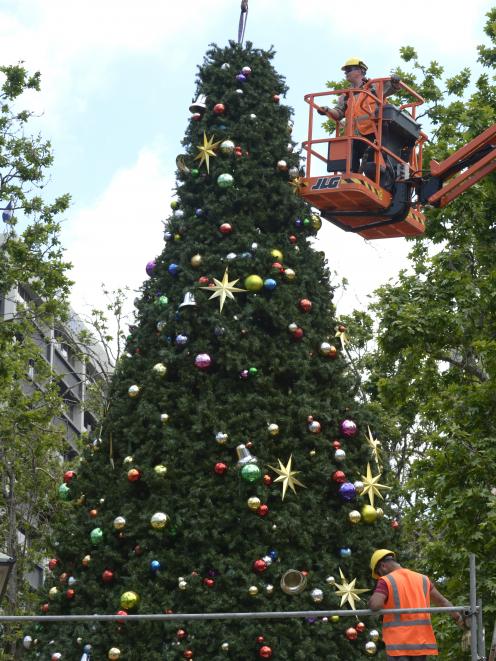 Contractors assemble the 12m Octagon Christmas tree yesterday morning which will be lit in the annual tree lighting ceremony on Friday. Photo: Gerard O'Brien
The Christmas season has begun in Dunedin once more.

The tree stands about 12m high and weighs almost one tonne.

She understood it was also the tallest Christmas tree in the South Island.

The tree was given to the city by the Caversham Foundation more than 10 years ago.

''This week, every year, the tree and decorations come out.''

The tree will remain up in the lower part of the Octagon until just before New Year's Eve while all the other council Christmas decorations will remain until the first week of January.

The tree was made up of three large pieces and the star which stacked similarly to a woman's ball gown from the 1800s, Ms Anderson said.

''It's got a skirt and a hoop but the hoop is made of steel. Those hoops make up the structure of each piece which gives it its strength.''

The tree was adorned with 16,400 lights which will be lit in the annual tree lighting ceremony this Friday.

The Fairfield School Choir will sing Christmas carols from 8pm and the tree will be lit about 9.30pm.

The annual Santa Parade will be held this Sunday.