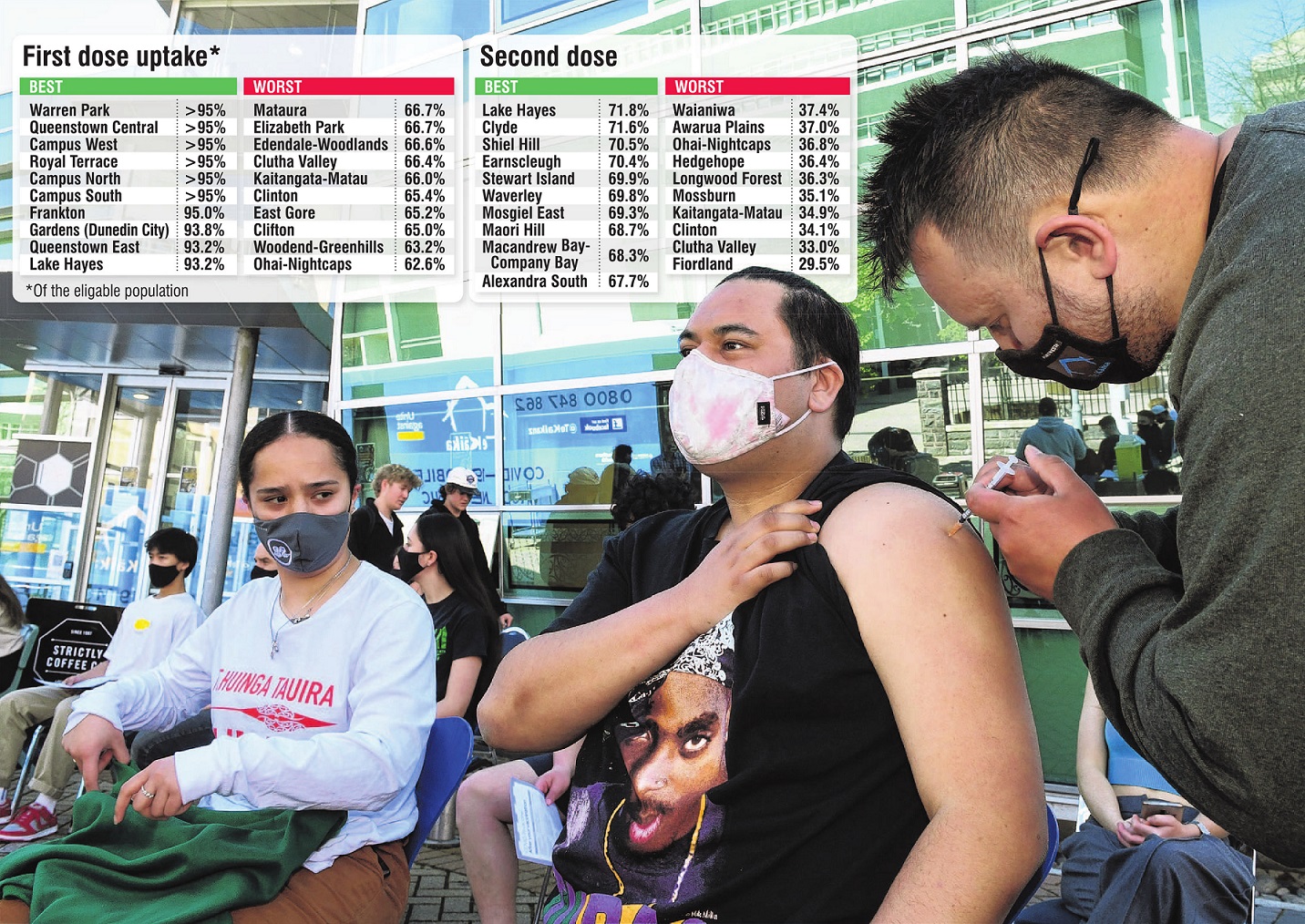 Te Kaika chief executive Albie Laurence delivers a Covid-19 injection to Maori studies PhD candidate Porourangi Templeton-Reedy while Kiritea Smith watches. There has been a high uptake of people getting their first dose of the vaccine in areas around the University of Otago. PHOTO: STEPHEN JAQUIERY
Public health teams will need to take the Covid-19 vaccine into communities to get vaccination rates up, a Dunedin city councillor says.

People who lived in high-deprivation suburbs were less likely to have easy access to health services and time was an issue for those in rural areas, Cr Jim O’Malley said.

A drive to get vaccination rates above 90% has been gathering momentum in the past week after the Government conceded eliminating an outbreak of Covid-19 was now unlikely.

The Ministry of Health released detailed data yesterday about vaccination rates in different areas, and vaccination has been pushed as the main way out of heavy restrictions associated with the pandemic response.

"An active outreach will be needed to make it work," Cr O’Malley said.

Lake Hayes was the South’s most vaccinated area and was 23rd nationally for the proportion of its eligible population that had received the second dose of the Pfizer vaccine, at 71.8%.

The more affluent suburbs in Dunedin were also in the South’s top 10, as was Stewart Island, which had received a targeted campaign.

Suburbs around the University of Otago’s Dunedin campus were prominent in the South’s top 10 for people having received the first dose.

Cr O’Malley expected that reflected young people being keen to receive the vaccine when it became available to them.

Queenstown Lakes Mayor Jim Boult said he wanted his district to be 95% vaccinated.

"The task in front of us is to encourage people to get their second dose," he said.

He encouraged people who were opposed to vaccination to take another look at their stance and consider their friends and neighbours.

For people who had simply not got around to getting vaccinated, now was the time, he said.

The Ministry of Health data continued to show rural areas of the South lagging.

Rates of vaccination for Maori and Pacific people have also tended to be disappointing nationally, although not in all areas of the South.

Clinton and the coal-mining area of Ohai and Nightcaps were among the places slower than others to get vaccinated.

Clinton farmer Steve Wilson said people had become fearful about the pandemic and ways to control it.

Scare tactics seemed to be used on both sides of any debate — to persuade people into compliance or to raise doubts about the vaccine’s safety.

Clutha Valley was among the areas in the South’s bottom 10 for both the first and second doses.

Businessman Shane Bocock was surprised the valley’s vaccination numbers were not higher.

He doubted there was anti-vax sentiment in the community and hoped people understood achieving a high vaccination rate had implications, such as for freedom of movement.

"I’d encourage people, if they are hesitant, to think a bit wider about future prospects for them and the community."

There was a logistical matter of getting a timetable together so that any mobile service would be used to best effect.

Mr Tong understood some people, because of other demands, "just can’t get there at the moment".

He encouraged anybody who had been sitting on the fence about getting vaccinated to get it done.

Gore Mayor Tracy Hicks said it being a busy time of year for farmers was among the challenges; officials were working through options, including a mobile service.

"We need to get on top of this, sooner rather than later."