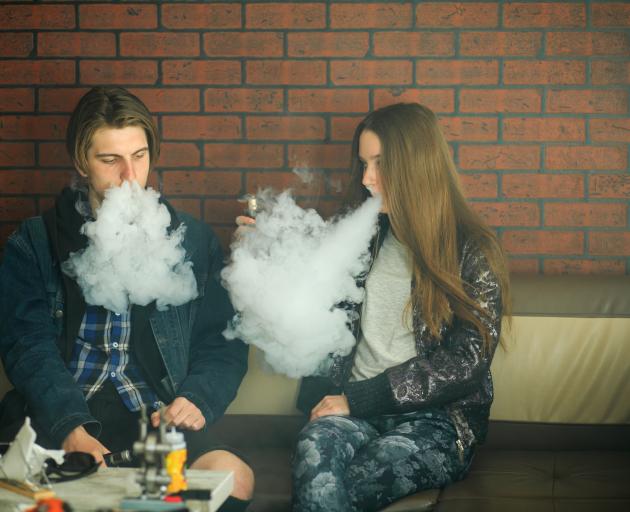 The Cancer Society is concerned about young people starting vaping. It is keen to collect the views of parents around the issue. PHOTO: GETTY IMAGES

With concern growing among health organisations about the potential harmful effects of vaping, the Cancer Society is calling for feedback from the community on the issue.

The informal research, being conducted through an online survey, is taking place against the backdrop of an ongoing review of the Smokefree Environments Act by the Government.

Vaping regulations are being considered as an amendment to the Act.

Cancer Society Otago-Southland Division health promotion and advocacy manager Sophie Carty said new vaping regulations were expected to come out before the end of the year.

‘‘Vaping is such a new area, it’s very hard to know whether it is beneficial or not,’’ Ms Carty said.

The Cancer Society is concerned about children and young people taking up vaping and the negative impact this could have on their health and development.

While vaping could be a useful tool to help adults quit smoking, the Cancer Society wanted to ensure young people were adequately protected, she said.

The efficacy of vaping as a smoking cessation tool was also unclear, and more research was needed.

A study last year of smokers attempting to give up using vaping as a tool, led by University of Otago research fellow Mei­Ling Blank, had shown mixed results.

The researchers felt that, while some smokers had been able to stop smoking with the help of vaping, it was unclear whether it would ‘‘provide an overall benefit to the health of the population’’.

Ms Carty said the Cancer Society believed ‘‘vaping definitely needs to be regulated to help people who don’t smoke not to take it up — particularly young people’’.

‘‘Some call it safe, but we don’t actually know that it is,’’ she said.

The Cancer Society would support only licensed specialist stores, with expertise on smoking cessation, to be able to sell vape products.

‘‘And alongside that, we would also like to see the availability of tobacco products restricted a lot more,’’ she said.

‘‘In terms of tobacco availability, studies have shown that greater numbers of tobacco outlets lead to more youth smoking.’’

While vaping remained unregulated, the vaping retail industry was ‘‘really pushing vaping’’ through advertising and marketing.

‘‘And we are hearing media stories with anecdotal evidence of youth taking it up.’’

While it awaited the Government’s development of regulations, the Cancer Society was keen to collect the views of parents and the wider community around the issue of vaping.

‘‘We would like to know what parents are seeing and experiencing with their kids around vaping.’’

The survey findings will be used to get a better understanding about how vaping is affecting young people and their families and inform submissions on the regulations.

Developed by the Auckland-Northland division of the Cancer Society, the the online survey is only available to parents with school-aged children.

The survey for parents can be found via the link https://www.surveymonkey.com/r/CancerSocietySurvey

People can also fill out an online submission form around increasing smokefree environments, via https://otago-southland.cancernz.org.nz

In September 2019 the governor of Massachusetts banned the sale of all vaping products in the state because of the national outbreak of vaping-related lung disease. It is (initially) a four-month ban only, and it survived a legal challenge in October.