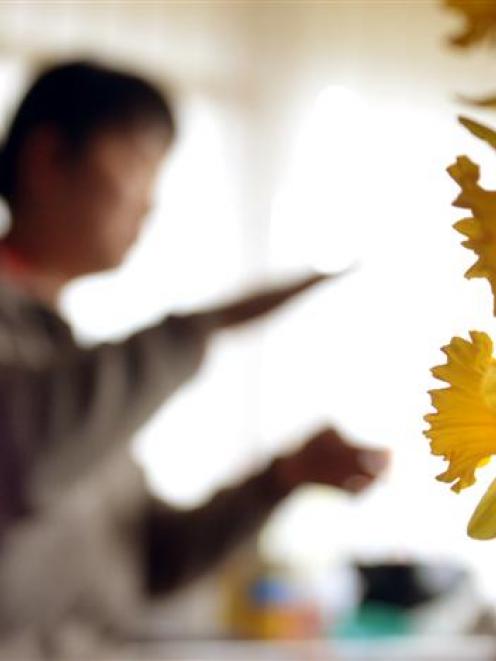 Police told her at the time of attending the incident, and in a subsequent email, that the woman would not be charged and suggested she contact her insurance company to recover the cost of the damage.

Ivy Ding was home with her young son and elderly mother on Saturday night when she heard noises outside her house about midnight.

''It was getting louder and louder,'' she said.

''I opened part of the curtain and saw a woman. She was standing by ... a window and used both hands to pull and push the door.

''I quickly opened the curtain and turned the lights on. I thought she might run away.

''She saw me standing next to the window and she ran towards me wildly with a very crazy, terrible shouting.''

The woman then banged on the window before removing her shoes and using them to smash the glass.

The affray woke her toddler, who was sleeping in her room, and he started crying.

''She came in [the window] halfway and grabbed me,'' Ms Ding said.

''She pulled at me and tried to use her shoe to get me.

The woman threw a rock into the room and the scuffle caused Ms Ding to receive cuts from the broken glass.

Her mother had taken her son out of the room during the attack.

Ms Ding managed to free herself and ran out of her house to call for help.

Her neighbours and a taxi driver came to her aid and told her they knew the woman who had attacked her.

The attack was made all the more terrifying by the fact her husband was away overseas.

She was bleeding and had bled over her carpet and bedroom.

The police arrived and spoke to witnesses before coming to speak to her.

''I was really disappointed with what he had said,'' Ms Ding said.

''He said, 'She had her 21st birthday party and she is completely drunk and doesn't know what she has done'.''

The officer told her the woman would not be charged and she should contact her insurer to have the damage fixed, Ms Ding said.

''I was really, really upset by hearing this.''

The next day she saw the extent of the vandalism, as the offender had thrown pot plants around her property, including at windows, and thrown a rock at a car.

She spoke to police again on Sunday and was again told the woman would not be charged because she was so intoxicated.

''She still needs to take responsibility for her behaviour,'' Ms Ding said.

''This happened to myself, my baby and Mum and was all shocking.

She had struggled to sleep since the attack and experienced anxiety when she heard noises at night.

''It was a very terrible experience,'' she said.

In a later email to Ms Ding by an attending officer, she was told ''it was not my intention to lay a charge against the girl who damaged the window''.

''I explained to you that this was due to the fact that she was so intoxicated that she was completely disoriented and confused at the time, and was unaware of what she was doing,'' the email said.

''Although intoxication is not a defence to criminal offending, it is necessary before charging someone in the criminal jurisdiction with damage, to be satisfied that the person either had an intent to cause damage, or had acted with a disregard to the possible or likely consequences.

''Neither ingredient exists where the person is completely unaware of what they are doing.''

A police spokesman told the Otago Daily Times yesterday that police were still looking into the matter.

They were not able to comment further by deadline last night.